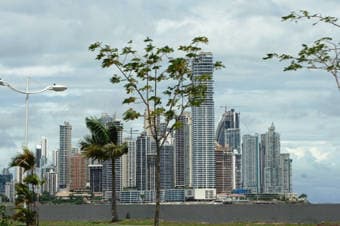 Depart Gatun aboard your air-conditioned transportation and get ready to explore the ruins of Old Panama City. This tour lets you experience Panama while onboard of your transportation and two guided walking tours. Travel on the new highway connecting the Atlantic and Pacific for approximately an hour to the ruins of the old capital city.

After your trip across the isthmus highway, arrive at Old Panama City. This site was founded on August 15, 1519 by the Spanish conquistador Pedro Arias de Ávila. The city was also a stopover point of one of the most important trade routes in the history of the American continent, leading to the fairs of Nombre de Dios and Portobelo, where most of the gold and silver that Spain took from the Americas passed through.

The pirate Sir Henry Morgan destroyed the city during a devastating fire on January 28, 1671. Panama City was then rebuilt and formally established two years later in a peninsula located eight kilometers from the original settlement. The new location was chosen to protect its settlers against future pirate attacks. The place where the previously devastated city was located is still in ruins, and has become known as Panama Viejo, or "Old Panama." Relax and take in the sights, sounds, and shopping at this historic location.

After visiting Panama Viejo, continue on to Casco Antiguo, the old colonial city. Casco Antiguo displays a mix of architectural styles, which in turn reflect the cultural diversity of the country. Caribbean, Republican, Art Deco, French and Colonial architecture mix in this historic area. Most of Panama City´s main monuments are located in Casco Antiguo. During your walking tour you will see the Metropolitan Cathedral and the National Theater among other buildings.

Continue on to your final destination, Las Bóvedas. Las Bovedas in Casco Viejo is the sea wall of the Spanish Fort on the point of the peninsula. The site gets its name from the dungeons embedded in the wall, which today house an art gallery and a restaurant. A stroll along the top of the wall provides a unique view of Panama City across the bay. An extra 30 minutes as free time will be provided to further explore on your own in Casco Antiguo. Survey Panama City, from old to new from your transportation on the way back to the ship waiting for you in Colon.

Total walking time is about one hour and a half. Please wear light clothing, good walking shoes and a hat, and bring some bottled water.
Note: The Panama Canal Authority assigns specific time slots for the transit of a vessel through the locks. The ship will anchor in a designated area and will wait for instructions. Once clearance is transmitted to the ship, procedures begin to bring ship's tour passengers ashore. Therefore, tour departure times may vary and will be announced onboard. The return time of the ship to Colon or Cristobal may also be delayed due to transit through the locks. We recommend that you are prepared for any potential of delay in the ship's arrival to Colon or Cristobal and plan accordingly by bringing any needed medication or essential items on tour.

Depending on the voyage and itinerary guests will be dropped off in either Colon or Cristobal.

Reboard your vehicle for a transfer to the Colonial City

Tour of the Colonial City