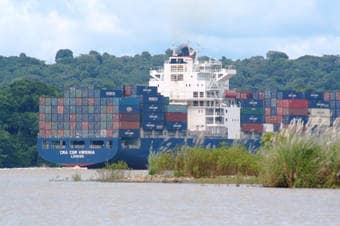 Travel to the Gamboa Resort and cruise through the jungle covered islands in Gatun Lake. Later, witness the mighty Gatun Locks in action. Board your air-conditioned transportation for the approximately 75-minute drive to the Gamboa Resort. Located on the banks of the canal, the resort beautiful grounds and gardens. Large tracts of lowland tropical rainforests that nourish thriving plants and harbor enchanting animal populations surround the resort.

After a break to stretch your legs, board your tour boat for an one hour- and-30-minute eco-cruise on Gatun Lake. Gatun Lake is a large artificial lake situated in the Republic of Panama; it forms a major part of the Panama Canal, carrying ships during their transit across the Isthmus of Panama. The lake was created between 1907 and 1913 by the building of the Gatun Dam across the Chagres River. The hills bordering the valley of the Chagres open up widely around the area of the lake, but come together to form a gap at the location of the dam.

Glide past lush rainforest to a secluded region of the lake and witness first-hand the splendor and excitement of the jungle. Exotic birds, monkeys, sloths, iguanas, and crocodiles are just a few of the animals that you may see in their native surroundings. The sampling of wildlife you witness during your motorboat ride is part of a much larger population. The Panama Canal rainforests are some of the most accessible green zones in the world. With over 50,000 acres of pristine rainforest, this natural gem hosts an incredible 105 species of mammals, 525 species of birds and 124 species of reptiles and amphibians.

After exploring the lake, you will re-board your air-conditioned transportation for a tour of the new Panama Canal Locks (Agua Clara Visitor Center). Spend approximately one hour observing the locks in operation. Your guide explains the engineering feat required to move ships over a continental divide that separates two oceans. This new Locks give you a new perspective of the Panama Canal, showing you the past, present and future of the same. After you learn as much as possible of the Panama Canal and how it works nowadays, you will also have an IN-FIELD experience of the Expansion project that took place at that same site. A detailed explanation of an expert from the design to the construction and operation of the biggest engineer project worldwide will amaze you. After seeing the locks up close, board your air-conditioned transportation for the drive back to your ship.

This tour is not recommended for passengers with physical disabilities. A camera with a zoom lens is recommended. Bring adequate sun protection (sunscreen, hat, etc.) A bottle of water is provided. Wear sensible footwear, such as sneakers. Tour sequence may vary. Depending on traffic, Agua Clara Locks may be visited first. Wildlife sightings, while common, are not guaranteed. Ship sightings in the locks are not guaranteed.

The Panama Canal Authority assigns specific time slots for the transit of a vessel through the locks. The ship will anchor in a designated area and will wait for instructions. Once clearance is transmitted to the ship, procedures begin to bring ship's tour passengers ashore. Therefore, tour departure times may vary and will be announced onboard. The return time of the ship to Colon or Cristobal may also be delayed due to transit through the locks. We recommend that you are prepared for any potential of delay in the ship's arrival to Colon or Cristobal and plan accordingly by bringing any needed medication or essential items on tour.

Depending on the voyage and itinerary guests will be dropped off in either Colon or Cristobal.

Stretch your legs and board the lake boats