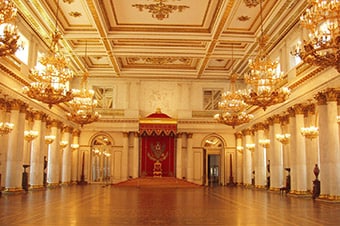 The grandeur and scope of the Hermitage Museum set it apart from any other art collection in the world. The Hermitage Museum, housed in the baroque-style Great Winter Palace, began as a private collection of paintings purchased by Catherine the Great. In 1852 it opened its doors to the public and today contains more than three million works of art. So vast is the Hermitage Museum that it is said that if one spent just three minutes in front of each exhibit, it would take almost three years to see the entire collection.

Begin this exquisite half-day when you board a comfortable motorcoach and set off through Vasilievsky Island to the Palace Square.

Designed by Rastrelli, the green and white, lavishly ornate, three-story palace is truly a sight to behold. Step inside and feel the splendor of the richly patterned parquet floors, ornate staircases, colorful frescos and gilded ceilings. In total there are 1,057 magnificent rooms, many open to the public.

Your specialist guide will escort you through some of the thousand rooms that house many incredible works of art. Explore the display rooms that showcase paintings by Da Vinci, Rafael and Rembrandt, and study some of the Oriental, Russian and prehistoric art, dating from the Paleolithic to the Iron Ages..

Take a few moments to peruse the gift shop, brimming with books, reproductions and artful souvenirs, before continuing on to the very special portion of your tour.

In commemoration of the State Hermitage Museum's 250th anniversary, a gala ceremony was held to announce a new permanent collection to be housed in the General Staff Building. One of St. Petersburg's most important architectural monuments, the structure was built between 1820 and 1828. Now, the fourth floor has been dedicated to the display of famous artworks by Impressionists and Post-Impressionists, which earlier were exhibited in the Winter Palace. Now, for the first time, the Hermitage Collection of 19th-20th century French painters is displayed in its entirety.

The Impressionism movement began in Paris in the latter portion of the 19th century. Its themes were founded in realism, the depiction of everyday life, and the capturing of fleeting moments. With the invention of paint in portable tubes, artists began to work outdoors and away from a studio environment, and Impressionism flourished. Vibrant color, natural light and modern scenes define the style of this significant movement in art history.

The gallery tour begins with 14 paintings by Claude Monet and continues the Impressionism theme with the Edgar Degas hall, followed by the still-life works of Henri Fantin-Latour and a robust collection by Auguste Renoir. As you stroll from room to room, you will find every turn unveils another exquisite piece by Paul Cézanne, Paul Gauguin or Vincent van Gogh. It is a dazzling collection that will remain in your mind's eye for a lifetime.

At the end of your tour, reboard the motorcoach and enjoy a brief tour of the city's highlights as you journey back to port.

The Hermitage Museum requires all visitors to pass through security screening. Guests with a pacemaker must carry proof of medical exemption to avoid the screening process without exceptions. Admission will otherwise be denied into the museum.

Hermitage museum as well as General Staff Building are equipped with elevators.

Depart the ship for a Tour of the Hermitage Museum