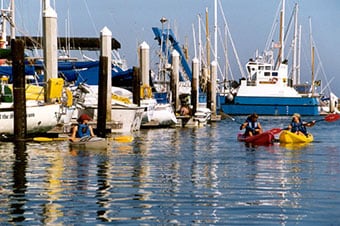 Paddle your way to paradise. Santa Barbara at sea level via kayak is one of the most relaxing ways to explore the American Riviera®, and its stunning land and seascapes. Wear your swimsuit plus synthetic shorts or pants and a synthetic shirt or jacket and you'll be more than comfortable throughout this guided half-day kayak tour of Santa Barbara Harbor.

Begin your adventure with convenient transportation to Sea Landing and the put-in point where your guide will offer a comprehensive safety lesson. If you have brought a daypack with dry clothes, shoes and towel, you may leave it in the tour company's locked van. Then it's time to don your paddle jacket and climb aboard your choice of a single or double sit-on-top kayak.

Soon you'll be paddling your way through the harbor, savoring the sea breeze, and soaking in the sights and sounds of Stearns Wharf, the oldest working wharf in California. In 1872 construction was completed on what had just become the longest deep-water pier between Los Angeles and San Francisco. Named for its builder, local lumberman John P. Stearns, the wharf served the passenger and freight shipping needs of California's South Coast for over a quarter century.

When the railroad finally reached Santa Barbara in 1877, Stearns added an additional spur to the wharf, providing a necessary transport link to his lumberyard and the nearby Southern Pacific Depot. The spur was damaged by severe storms in the early 1900's and was ultimately abandoned in 1923. A railroad logging car remains on the spur as a legacy of the times. Since its beginning, Stearns Wharf has had its share of natural and economic disasters, from the big earthquake in 1925 to a fire in 1973 which caused its closing. The new Stearns Wharf stands today as Santa Barbara's most visited landmark.

Leaving the wharf area behind, you'll be enthralled by the beauty of Santa Barbara's beaches, most of which face south instead of west. East Beach and Leadbetter Beach are two of the city's most-visited strands. They boast everything a sun worshipper could wish for with volleyball, biking, skating, art shows, hotels, restaurants and proximity to the Santa Barbara Zoo. People watch as you paddle by all the shore-side activity and share the bounding main with sailboats, surfers, kite-boarders and more. Between Shoreline Park and the breakwater, Leadbetter Beach hosts weekly sporting events, parties and the occasion radio station event to add to the ever-changing views. While you paddle along, enjoy the expert commentary of your professional guide on local trivia, marine ecology, cultural history, paddling techniques and personal insight into what it's like to live and work in such a beautiful part of the world. Watch for sea lions, paddle through kelp beds, and fall into the kind of tranquil, meditative state that comes naturally when kayaking.

Back at Sea Landing, you can change clothes and return to your ship or set off for some independent exploration and shopping.