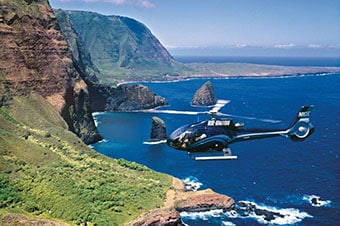 From heavenly beaches and tumbling waterfalls to lush rainforest and stark, volcanic ridges, Maui boasts a diverse and beautiful landscape. It's no wonder the readers of Conde Nast Traveler have voted it "Best Island" for more than a dozen years.

Discover many of its most dazzling highlights for yourself as you soar over breathtaking scenes of island beauty on a thrilling helicopter tour. And, since thousands of humpback whales migrate to Maui's warm waters, if your visit coincides with their arrival, you may catch sight of these magnificent marine mammals.

Soar over the old whaling town of Lahaina and skim above the shimmering sands and crystal-clear waters of Kaanapali, one of the island's most popular resort areas. Nearly 75% of Maui's land area is isolated and inaccessible due to extreme terrain and rainforests. With no roads and few trails, it is impossible to see this hidden interior landscape except by helicopter.

Here, deep in the heart of its wildest regions, you'll peer down on an undulating tapestry of lush tropical rainforests and deep valleys full of cascading waterfalls. Depending on your route, you may pass over the famed Iao Valley and the natural rock formation called the 'Iao Needle. The green-covered stone protruding from the valley floor is actually an old basaltic core (volcano remnant).

It is surrounded on all sides by the Pu'u Kukui Crater, the site of one of the most famous battles in Hawaiian history. In 1790 King Kamehameha I defeated the Maui army in his quest to unite the Hawaiian Islands. It is said that when the battle was over, the stream was so dammed with all the bodies that the water ran red with blood. The site was named Kepaniwai "damming of the waters."

As you soar over one gorgeous scene after another with your pilot, who is also a State of Hawaii Certified Tour Guide, you'll gain insight into the region's history and culture. The island of Maui was named after a mythological being who snared the sun at Haleakala to slow its course so his mother Hina could get her kapa making done.

King Piilani was the first ruler to unite all of Maui under a single family of alii (royalty) in the early 15th century. In 1790, King Kamehameha I, Maui's last king, took control of Maui and made Lahaina the new capital of the unified Hawaiian Kingdom. For nearly five decades, Lahaina served as the center of government for Hawaii.

Upon your return and landing, you'll no doubt savor a vast collection of memories that you'll always remember and perhaps share with your fellow passengers onboard.

This excursion was chosen last season by Princess passengers for overall tour quality and outstanding customer service and awarded Shore Excursion of the Season in Maui.

Carry-on bags are not allowed and there is limited secure storage at the heliport. iPads, iPad minis or tablets are not permitted on the flight. Oxygen devices of any type are not allowed.

Depart from ship to heliport

Board helicopter for aerial tour

Re-board mni-bus for return to ship