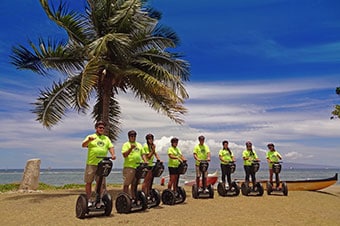 Easy and fun, a Segway is an entertaining and unique way to see the sights of Lahaina. You'll be surprised how quickly you'll adapt to your eco-friendly, battery-powered Segway and how simple it is to operate as you roll along paved roads and the coastline on this three-hour tour that's fun for the whole family.

Begin with a short van ride from port to the starting point, where your friendly instructor will provide a safety briefing and orientation. After a practice session, follow your guide onto the streets of Lahaina, and off you go!
Once the capital of the Kingdom of Hawaii and a bustling whaling port, Lahaina is a town steeped in historical significance. As you roll along, your guide will tell you fascinating stories of the island's plantation settlement, the missionaries that arrived here and the robust whaling era.

Your tour takes you off the beaten path and shows you the true gems of Lahaina, giving you a taste of local life. The influence of Japanese and Chinese immigrants to the island is evident in the Jodo Mission, which is home to an impressive 12-foot-tall bronze and copper statue of Amida Buddha, the largest of its kind outside Japan. Nearby Baby Beach got its name for its soft sand and tranquil waters.

There are 62 designated National Historic Landmarks in Lahaina Town, and your tour showcases such attractions as the Seaman's Hospital. Now restored to its former glory, it was originally built in 1833 by a Honolulu merchant then handed over to the U.S. Marines in 1843. It was a safe haven for injured seamen, but rumors tell that King Kamehameha III purposely had it built a mile away from the prying eyes of the devout Christian governor at the time so that it could be used for more decadent indulgences.

Your guide will enlighten you with stories of yesteryear as you ride down picturesque Front Street, heralded as one of the "Top Ten Greatest Streets," and Banyan Tree Park, named for a 140-year-old tree that amazingly covers an entire acre and has stood over countless celebrations. See Banyan Court, the courthouse which in the 1800s served as a palace for King Kamehameha III, and zip past the Old Fort Ruins.

Your Segway® gives you the freedom and confidence to discover hidden treasures not seen from a tour bus, such as the prison, or Hale Pa'ahao, which is loosely translated as "Stuck in Irons." The prison dates back to the early 1850s and was built by convict laborers with coral stone from the demolished waterfront fort to house those arrested for such violations as disorderly conduct, dangerous horse racing or working on Sunday.

The ride is exhilarating, and the smiles and waves from locals and tourists alike will brighten your day as you enjoy every moment of exploring the charming and culturally rich Lahaina Town and its highlights.

At the conclusion of the tour, return your Segway and relax on the picturesque ride back to the pier.

Minimum age is 10 years and guests must weigh between 85 lbs. and 260 lbs. and be at least 5' tall. Participants should wear closed-toe shoes and loose, comfortable clothing. Safety reflective vests and helmets are provided. Anyone suspected of being under the influence of alcohol will not be allowed to ride. Pregnant women are not allowed to participate. Guests need to be able to step on and off the Segway without assistance, which requires physical abilities similar to climbing and descending stairs without the support of a handrail or other walking aid. Stamina to use ankle and leg movements to control the Segway and ability to stand for the duration of the tour are required. Segway participants must remain alert to their surroundings, the condition of the terrain and possible traffic.

Transfer to Segway base for safety briefing and training