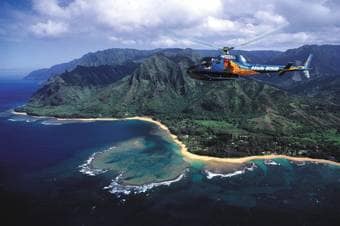 Lift off in an air-conditioned jet helicopter passing Nawiliwili Harbor, named for the Wiliwili trees that were once abundant in the area and the Menehune Fishpond. Legend states it was built by the Menehune, leprechaun-like little people, in one moonlit night. Archeologists date the pond to pre-Hawaiian times, around 1,000 years ago.

Soar over the Hanapepe Valley with its many waterfalls and dense tropical forests followed by views of Waimea Canyon - the "Grand Canyon of the Pacific."

Waimea Canyon is the largest canyon in the Pacific and one of its most dramatic natural wonders. The canyon measures 10 miles long, 1 mile wide, and more than 3,500-feet deep. It was carved thousands of years ago by rivers and floods that flowed from Mount Waialeale's summit.

The lines in the canyon walls depict different volcanic eruptions and lava flows that have occurred over the centuries. Even though smaller than the Grand Canyon of Arizona, Waimea Canyon rivals it in rugged beauty.

Wailea Falls, of "Fantasy Island" TV fame, is a stupendous 80-foot cascade that feeds into the river. Imagine this amazing place in ancient times when Hawaiian men would jump from the top of the falls to prove their manhood.

The Alakai Swamp, located on a plateau near Mount Waialeale, is extremely wet with numerous alpine bogs. Clouds often obscure the terrain surrounding the swamp and Waialeale Crater which receives 460 inches of annual rainfall, the wettest spot on earth.

But if the weather permits, your helicopter will fly safely over the crater with its lush green vegetation, numerous waterfalls, and "Jurassic Park" movie settings. To complete this half-day excursion, you'll soar over the isolated Na Pali Coast with its beautiful valleys and beaches, which were used as backdrops for the film "Raiders of the Lost Ark."

Views of Waialeale Crater and Wailua Falls are weather permitting. Carry-on bags are not allowed and there is limited secure storage at the heliport. iPads, iPad minis or tablets are not permitted on the flight. Oxygen devices of any type are not allowed.

Re-board van and return to ship