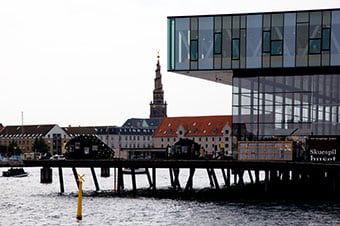 What you will visit:
Christiansborg Palace Reception Rooms
Standing proudly on Slotsholmen, a small island in the center of Copenhagen, is Christiansborg Palace, a granite and copper extravaganza of neo-baroque architecture. Once the principal residence of the royal family, Christiansborg Palace is home to the prime minister's office, Danish Parliament and the Danish Supreme Court. The Reception Rooms, used by the queen and the royal family for official occasions, gala dinners and New Years' receptions, are richly adorned with furniture and works of art rescued from two earlier palaces.

Canal Cruise
Discover many of Copenhagen's most treasured landmarks as you pass Nyhavn Canal, lined with 500-year-old step-gabled houses. View the old naval base of Holmen, the new Royal Library, and the Copenhagen Opera House.

Tivoli Gardens and Behind the Stage at the Pantomime Theater
World-famous Tivoli Gardens, in the center of the city, is a vital part of Copenhagen's cultural scene. One of the world's oldest amusement parks, it showcases a beautiful parade of flowers, Tivoli Lake, cafes, an aquarium and a concert hall. There are a host of rides, including a wooden roller coaster that was built in 1914 and the Star Flyer, the world's highest carousel. An exclusive behind-the-scenes tour of the Pantomime Theater, constructed in 1874, is an opportunity to learn of its royal heritage.

What you will see along the way:
There is much to see in this fascinating city, a seamless blending old and new. Your motorcoach will wend through the lively streets and take in such sights as City Hall Square, City Hall and the Glyptotek Art Museum. Pass by Old Copenhagen, where the old Stock Exchange sits, the brightly colored waterfront canal district of Nyhavn, and magnificent Rosenborg Castle. On the cruise of Copenhagen's canals and inner harbor, marvel at many of the city's treasured historical buildings and national landmarks.
Photo Opportunities:

The Little Mermaid Statue
No visit to Copenhagen is complete without seeing the city's most famous symbol: The Little Mermaid. Completed in 1913, this famous statue was erected to express gratitude to Hans Christian Andersen and his world-known fairy tales.

Amalienborg Palace Courtyard
Acclaimed as one of the most beautiful squares in Europe, the courtyard is surrounded by four equal-sized rococo palaces, oneof which is used as museum. Enjoy a magnificent vista of the royal palace from the Opera House.

Order of sites maybe visited in reverse order. Some traffic congestions may occur.
Canal Cruise may not be exclusive for the group. Free time is available at Tivoli Gardens for you to purchase lunch (at your own expense).

In the event of a royal audience at Christiansborg Palace, Rosenborg Castle will replace Christiansborg Palace. Flash is not permitted at the palace - slippers is mandatory. Slippers is provided upon arrival at the palace. The Pantomime Theater has a restriction of max 15 per group, therefore the group of this tour may be split into two groups during the visit of the theater.

Drive to Tivoli Gardens and time at leisure, including Behind the Stage at the Pantomime Theater