Behind the Scenes - Aquarium of the Bay 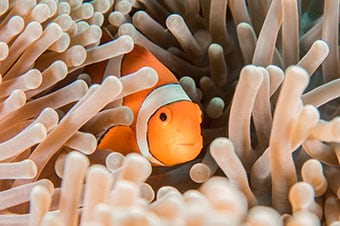 Look into the eyes of a hungry leopard shark, watch divers plunge into tanks full of fish, see baby jellies in their nursery, and more with two educational and exciting tours of the Aquarium of the Bay.

With an emphasis on marine species found exclusively in San Francisco Bay and surrounding waters, the Aquarium of the Bay boasts over 20,000 aquatic animals including octopuses, jellyfish and 50 sharks such as the eight-foot-long sevengill, the largest predator found in the Bay.

Get to know the many secrets the Aquarium of the Bay holds with two different tours geared for almost everyone in the family. Be sure to wear comfortable walking shoes and bring along a camera to capture each memorable moment.

The fun begins as you board your coach at the pier for the short journey along the Embarcadero, which follows the seawall, a boundary first established in the 1860s.

Just a few minutes later, you'll disembark at the city's historic Fisherman's Wharf, which dates back to the mid-19th century. Soak up the lively atmosphere and breathtaking views of Alcatraz, the Golden Gate and Bay Bridges, and the city skyline as you walk down to the Aquarium, located at the entrance of Pier39.

The 'Behind-the-Scenes tour,' designed for those as young as five, offers a sneak peek into the aquarium's activities from the staff's point of view. Your 45-minute guided tour begins as you walk across the catwalk above the fish tanks. Learn how naturalists, specialists, and volunteers help care for marine animals like bat rays, angel sharks, sea otters, sea stars, moon jellies and more, and discover the secrets behind dive operations.

Ever dream of being a marine biologist? Then, be sure to sign up for the 'Feed the Sharks Tour,' a 75-minute adventure limited to a small group of five and those eight years and older.

After arriving at the Aquarium naturalists will guide you down the catwalk over the Aquarium's Nearshore and Offshore tunnel exhibits to view areas the public rarely sees like the baby jellies nursery, the skate grow-out and holding space, and other behind-the-scenes animal care work areas. You can also try your hand at aquatic biology, and testing the pH and oxygen levels of the water in San Francisco Bay in the Aquarium's research lab.

But maybe the most thrilling and memorable part of the tour is feeding the many inhabitants that call the Aquarium their home. Each person will receive a bucket of seafood and feed the sharks, rays, skates and other fishes that live in the 350,000-gallon Offshore tunnel exhibit.

When your exciting venture comes to an end, you'll return to the pier with a treasure trove of wonderful memories to share with friends and family for years to come.

Aquarium and behind the scenes tour

Transfer from aquarium to port