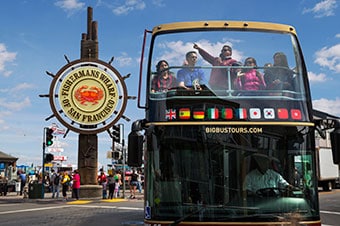 Get a fantastic overview of the City by the Bay on this comprehensive bus tour featuring 16 of San Francisco's most beloved sights. Remain on the bus for a 2.5-hour fully narrated tour - or hop-on-and-off as you choose, exploring the attractions that interest you - your ticket is valid all day! The guided tour can be enjoyed live, with fascinating facts from your knowledgeable guide, or via a recorded commentary audio tour in English, Spanish, French, Brazilian, Portuguese, German, Korean, Japanese, Cantonese or Mandarin.

You'll depart from the ship's pier and proceed to San Francisco's oldest and most charming parks, Washington Square, and delightful North Beach - the city's Little Italy. This is the neighborhood where Joe DiMaggio grew up (and briefly returned to live with his wife Marilyn Monroe). In the 1960s, this neighborhood was the epicenter of the "Beat Generation" and home to Beat writers Jack Kerouac and Allen Ginsberg. Poet Lawrence Ferlinghetti, founded the City Lights Bookstore, which still stands as a historic landmark on the corner of Broadway and Columbus. With its many cafes and restaurants, this is a great spot to hop-off for a meal or a stroll along the waterfront Embarcadero.

Cosmopolitan Union Square is San Francisco's premier destination for shopping, fashion, art galleries, and theater. Deriving its name from the pro-Union rallies held there before the Civil War, it is the ceremonial "heart" of the city, where many public events and concerts are held. Nearby architectural masterpieces include City Hall, the Asian Art Museum, Central Library, Symphony Hall and the Opera House. Your next stops include Alamo Square, where you can appreciate a fine selection of San Francisco's colorful and iconic Victorian row houses, and the Haight-Ashbury district, famous as a center for the 1960s hippie counterculture movement.

Adjacent to Haight-Ashbury is wondrous Golden Gate Park, with more than 1,000 acres of meandering paths and green expanses and home to the California Academy of Sciences, Japanese Tea Garden, de Young Museum, and Botanical Gardens.

From there, you can make your way across the world-famous Golden Gate Bridge, a suspension bridge that spans the mile-wide channel between the city and Marin County with impressive towers, sweeping main cables, and its signature red-orange color. Return to the City Center via Presidio Park, with stops at the Palace of Fine Arts, steep and windy Lombard Street, Chinatown, and Steuart Street - home to upscale "Restaurant Row." The tour ends at the ship's pier on Embarcadero Street located just a short distance from Pier 39, home to the Aquarium on the Bay and a favorite gathering spot for a large population of California sea lions.

This tour gives a broad view of this magnificent and multi-layered city and is as in-depth as you choose to make it. Hop-on-and-off in each neighborhood to get an up-close experience in every neighborhood, choose just a few select districts to explore, or stay on the bus for a thorough overview - this tour is endlessly customizable!

There are 16 stops on the hop on / hop off bus. Maps will be provided with the 16 stop options

11 Buses in the fleet are wheelchair accessible with a ramp. Please send advance notice. Motorized wheelchairs and scooters are not permitted.

Reboard your motorcoach and return to the ship.