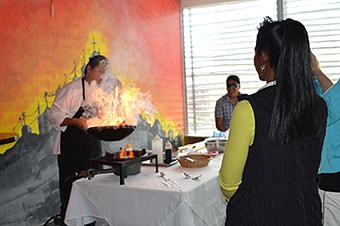 The best way to get to know the true heart of a city is through its cuisine. In Lima, the cosmopolitan capital of Peru, the country's history can be uncovered in its food: influences from centuries of Spanish, African, European, Chinese and Japanese inhabitants have been infused into the indigenous Inca traditional dishes to create a unique synthesis of flavors. Lima, known as the "Gastronomical Capital of the Americas," boasts long-standing culinary traditions and a tremendous bounty of crops. The people of this hospitable country are proud of their food and are happy to share it!

First, board your comfortable motorcoach for the ride to the market, where you can browse the stalls to get a feel for the local fruits and vegetables. Native crops include many varieties of indigenous potatoes, sweet potatoes, quinoa and lima beans, which actually got their name when boxes of these delicious legumes were exported to Europe and the rest of the Americas with their place of origin – Lima, Peru – prominently displayed!

From the market, it is a short drive over to the Señorio de Sulco restaurant. Owner Isabel Alvarez has written several cookbooks, and for over two decades, her restaurant has been a premier place to taste traditional Peruvian food. Here, the chefs will transform raw ingredients into delicious Peruvian specialties in front of your eyes, explaining the steps along the way. And the best part is, after seeing how the dishes are made, you will get to taste them as well! A lunch of seasonal specialties, such as arroz con pato (rice with duck) or congrio sudado (tender whitefish in a spicy broth), will be served.

The demonstration is not limited to food: you will also learn the secrets of the classic Peruvian cocktail the Pisco Sour, created in Lima in the 1920s by bartender Victor Vaughn Morris, an American who lived in the city for decades. A variation on the Whiskey Sour, the Pisco Sour is created around a base of the Peruvian alcohol pisco. Key lime juice, angostura bitters, egg whites and sugar are other typical ingredients, though some recipes may vary. In the 1940s and '50s, the drink gained a following among Hollywood actors who visited Lima; one story has Ava Gardner being carried away by John Wayne after she had a few too many Pisco Sours! Ernest Hemmingway and Orson Welles are also said to have been fans of "that Peruvian drink." A tricky cocktail to master, the Pisco Sour rewards those who are patient enough to learn how to prepare it, and you will come away from the demonstration with an excellent introduction and the tools to make your own.

At the end of your tour, you will re-board your motorcoach and return to ship with a fresh appreciation of Peru's renowned cuisine and a few tricks up your sleeve for bringing a little taste of Peru back home with you.

Food allergies and dietary restrictions must be advised at least 5 days in advance of the tour.