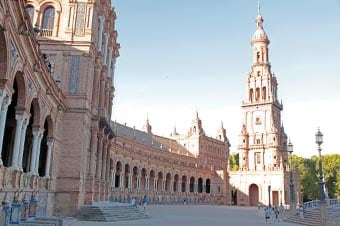 Departing from Cadiz, you will take a 105 minute coach ride to Seville, the capital city of Andalusia, and one of the more artistically and culturally significant cities in southern Spain. Once you arrive to Seville, your guide will take you on a panoramic ride including the Maria Luisa Park and the Pavillions from the Ibero-American Exhibition in 1929.

Begin your exploration of Seville at the Cathedral de Seville, part of this World Heritage site. Previously the spot of an ancient mosque, this 15th century church is the largest gothic building in the world and the third largest church in Europe, and where works of art abound. You'll see that the dazzling golden interior of the cathedral has traditional gothic details such as flying buttresses, stunning stained-glass windows, iron screens (rejas) closing off the chapels, elaborate 15th-century choir stalls, and Gothic reredos above the main altar. Step out into the Patio of Oranges for its refreshing citrus scents and a view of its Moorish-style fountain, again reflective of the city's founding influences.

Adjacent to the cathedral is La Giralda, the Moorish Tower that is the city's most recognizable landmark. While there are no steps inside, if you are up for climbing the seemingly endless ramp, you will be rewarded with amazing views of the city. (Only outside visit, this is not climbed)

Continuing your adventure on foot, head to the picturesque Santa Cruz district for a stroll through its narrow and winding cobblestone streets. El Barrio is deep in the heart of the Seville's historic center, and was the old Jewish Quarter until the 15th century. Rebuilt to its current glory in the early 19th century, it's filled with charming tree-shaded plazas, white-washed homes, taverns and cafes

Next stop is Casa de Pilatos, the permanent residence of the Dukes of Medinaceli, one of the most historied title lines in Spain, and home to one of the largest azulejo (Spanish glazed tiles) collections in the world. Casa de Pilatos, built in the 15th century, is a conbination of Italian Renaissance and Spanish Mudéjar styles and is considered aquitenssential Andalusian palace. The Palace has hosted many galas with guests such as Jackie Kennedy, Ava Gardner and Princess Grace of Monaco and has been featured in numerous films including Lawrence of Arabia. Featuring a cariety of architectural styles, this Palace hidden gems around each corner.

Head to a local restaurant for a delicious, three-course lunch before you continue to La Plaza de España. Built in 1928 for the Ibero-American Exposition of 1929 it is a landmark example of the Moorish Revival style in Spanish architecture. You'll have a brief stop for photos before your memorable day concludes with a scenic ride back to Cadiz and your ship

The drive between Cadiz and Seville is approximately 1.75 hours each way. Flash photos are not permitted in the Cathedral. On Sundays and Catholic holidays, the Cathedral of Seville will be visited from the outside only; interior can be visited after 02:30PM.

Visit to the Casa de Pilatos

3-course-lunch at a local restaurant