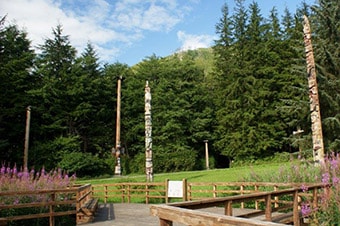 You'll depart your ship and begin your guided two-and-half hour tour with a scenic motorcoach ride in and around Ketchikan. You'll see Alaska's busiest waterfront, bustling with floatplanes and boats, and drive by infamous Creek Street, Ketchikan's former red-light district during the Gold Rush. Then, you'll travel along beautiful North Tongass Highway, passing salmon canneries and a pulp mill that was once the largest of its kind in the world.

After your city tour, your guide will introduce you to Totem Bight State Park, where an awesome sight awaits. Established in 1938, this unique park offers you a glimpse into the native Tlingit and Haida Indian cultures. Start by walking along a winding trail through a forest of mighty hemlock. You'll come to an old Indian campsite filled with colorful totem poles, each one telling its own fascinating tale. Totem carving is a time-honored craft, passed down over generations. Native carvers, using traditional hand-made tools, recreated the totems, restoring those that were badly damaged by time and weather.

Explore further to see a replica of a 19th century Clan House, or community house. These structures served as homes to several families at once, with each headed by a house chief of the same lineage. You'll get to step inside and learn more about the rich Native Alaskan culture.

Then, it's time to enjoy a coffee and some shopping at the Alaska Totem Trading Company before re-boarding your motor coach for your return ride back to your ship.

Tour operator is authorized under special use permit to conduct tours in the Tongass National Forest.