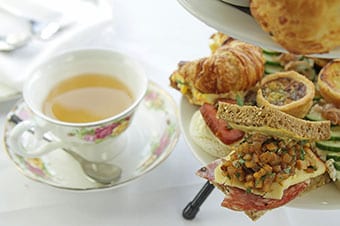 Depart from port on a guided motorcoach tour of charming Victoria. The majesty of the Olympic Mountains and the untamed wilderness of Vancouver Island provide striking contrast to the lovely, upscale neighborhoods, architectural landmarks and manicured parks in this lovely city.

Victoria, western Canada's oldest city, was founded in 1843 as a Hudson's Bay Company trading post. Victoria's early history has been carefully preserved and can be seen in the restored residential, commercial and public buildings. This city is the most "British" in all of Canada and boasts prominent reminders of its colonial past.

You'll drive through the stately downtown area, where the Legislative Buildings dramatically line the harbor. Constructed in 1893 by a young 25-year-old creative architect, it was built in honor of Queen Victoria's Diamond Jubilee. A large statue of Queen Victoria stands on the front lawn of the Neo-Baroque buildings as well a statue of a soldier to commemorate the province's military involvements. Atop the central dome, you can see a gold-covered statue of Captain George Vancouver.

The quaint shops, narrow alleys and colorful signs of the country's oldest Chinatown are a delight for the senses. You'll drive through the "Gates of Harmonious Interest" and be transported back in time and to another continent.

As you drive along the Inner Harbour into the heart of the city, arrive for high tea at one of the city's landmarks, the Pendray Mansion. This Victorian manor captures the essence of old Victoria's elegance, sophistication and charm. Built in 1890, it stands as one of the oldest, most magnificent buildings in Victoria, and the perfect setting for traditional English tea. Enjoy a generous tier of delicate sandwiches, delicious scones, Devonshire cream and jam, and a selection of delightful desserts, complemented by a choice of teas served in fine china.

At the conclusion of your refreshment, you may return to the ship via motorcoach or you may opt to take a 20-minute stroll back to port. A walk will give you an opportunity to enjoy Victoria's delightful weather and the street performers along the waterfront.