A Guided Walk into Victoria 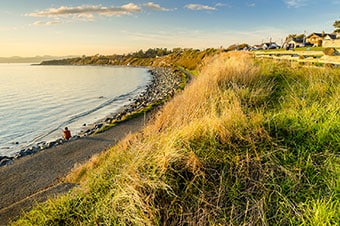 One of the best ways to get to know this city is on foot, and this two-hour comprehensive walking tour will satisfy history buffs, photographers and inquisitive travelers alike. So lace up and get ready to set your sights and camera on the magnificent landmarks that help define Victoria.

Your friendly and knowledgeable guide will meet you at the Ogden Point Cruise Terminal. From here, you'll follow the seawall, a Victorian landscape of manicured flowerbeds, graceful trees and sparkling streams.

As you leisurely meander along the landscaped paths, your guide will regale you with tales of this great city and its place in history. You may know that as the most "British" city in all of Canada, Victoria boasts prominent reminders of its colonial past in its carefully preserved architecture. But, at one time, this quaint city, founded in 1843 as a Hudson's Bay Company trading post, was the base of 25,000 prospectors on their way to the Fraser River gold fields in the Gold Rush of 1858.

Then, as now, unparalleled views of the Strait of Juan de Fuca, the international boundary between Canada and the United States, and the snow-dusted Olympic Mountains are proud reminders of Victoria's ancient past.

Continuing on, you'll amble to Beacon Hill Park. Originally called Meeacan (the Salish name for belly) by the First Nations people because from a distance, it looked like the belly of a large man lying on his back. The 62-acre park is also home of the world's largest totem pole, which stands 160 feet and crafted entirely out of cedar.

From here, you'll have clear views of your next destination: Victoria's historic Inner Harbour. Bustling with an entertaining mélange of street performers, and locals selling crafts, street food and souvenirs, the Inner Harbour also boasts some of the city's most notable landmarks such as the Royal British Columbia Museum. Since its unveiling in 1886, the museum's collections serve to preserve the area's cultural and natural history.

Another Victorian icon is the stunning Parliament building. Completed in 1897 in honor of Queen Victoria's Diamond Jubilee, the Neo-Baroque, Renaissance and Romanesque Revival structure boasts 350 rooms on four levels and an ornate roof that's adorned with 33 verdigris domes.

Further on is the gem known as the Fairmont Empress Hotel. This treasured landmark, once called "the heart and soul of the city," is a stunning reminder of a bygone era. Almost demolished in the 1960s to make way for a modern high rise, the Empress has been completely restored to her turn-of-the-century beauty earning the distinction of being "One of the Top 500 Hotels in the World," according to Travel+Leisure Magazine's 2007 rankings.

Afterwards, you may return to the ship via complimentary shuttle or stay downtown to explore and return on your own.

Tour distance covered is 2.5 miles. Wear comfortable walking shoes and jacket. Bring bottled water. Return to the ship at the end of the tour via complimentary shuttle or stay downtown to explore and return on your own.