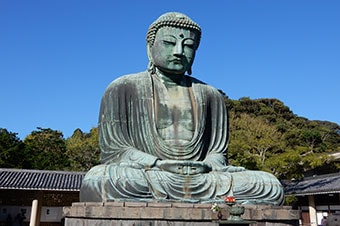 Your tour begins as you board your motorcoach for a scenic, 60-minute drive from Yokohama to the seaside city of Kamakura. As you approach Kamakura, you'll drive down Wakamiya-Oji, the city's famous mile-and-a-half-long avenue lined with cherry trees, azaleas, restaurants and shops.

Your first stop is the 750-year-old Great Buddha at Kotokuin Temple. Cast by order of Minamoto Yoritomo, the founder of the Kamakura shogunate, to rival the famed Daibutsu (Buddha) at Nara, you'll be awestruck at this 38-feet-high bronze statue.

Next, continue to Tsurugaoka Hachimangu Shrine, one of the city's most revered sights. The shrine is dedicated to Hachiman, the patron god of the Minamoto family and of the samurai in general. The shrine was originally built in 1063 in Zaimokuza, once home to Japan's oldest harbor, by Minamoto no Yoriyoshi. A head of Japan's Minamoto clan, he was perhaps most notable for having led, along with his son Minamoto no Yoshiie, the Imperial forces against rebellious forces in the north. The shrine was moved to its present location by Minamoto no Yoritomo; in 1191, he built its main pavilion to celebrate the establishment of the Minamoto Shogunate.

Your last stop is Komachi-Dori Street, where you'll have free time to browse through its traditional and modern shops and boutiques.

Your tour concluded with a drive back to the pier.

The drive between Yokohama and Kamakura is approximately 60 minutes each way, subject to traffic.
Wakamiya of Tsurugaoka Hachiman Shrine have been under construction so it will be covered. Due to the construction, it might spoil the scenery.
Japanese Yen is required for additional purchases.
This tour is not considered suitable for passenger with walking difficulties.
The coach cannot accommodate electric scooter. Tour order may vary.