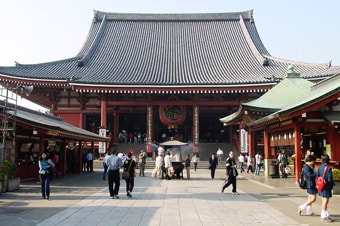 Your tour begins as you board your motorcoach for a scenic, 60-minute drive from Yokohama to fascinating Tokyo. Your route affords you a glimpse at the world's largest city, taking in such sites as the modern buildings, Ginza district and other landmarks in the city's center.

Your first photo stop in Tokyo is the Imperial Palace plaza. The palace occupies the original site of Edo Castle, the seat of power for the Tokugawa Shoguns during the Edo Period (1603 - 1867). Restoration to repair damage suffered by the palace during World War II was completed in 1968. Together with your guide, you'll explore the plaza's exterior walls of the palace where you may catch a glimps of the spacious grounds surrounded by moats. Afterwards, stop at the front of the Nijubashi Bridge, a picturesque two-tier bridge, for a superb photo opportunity.

Next on your itinerary is Meiji Shrine. Emperor Meiji was instrumental in opening Japan to the outside world in the late 1800s, ushering in the Meiji Restoration that brought the rule of the Tokugawa (shogun) government to an end. After the deaths of the emperor and empress, the Meiji Shrine was constructed to enshrine their souls. It was dedicated on November 1, 1920. Upon arriving at this great monument, you'll enter the shrine through twin 40 feet tall Torii gates, one of the largest in Japan.

Your tour continues to Sensoji Temple. Legend has it that in the year 628, two brothers fished a statue of Kannon out of the Sumida River, then they made the temple to enshrine the statue. Consequently, Sensoji was built there for the goddess of Kannon.

You'll enter through the Nitenmon or Kaminarimon Gate, bedecked, with a huge red paper lantern, to view the shrine. You'll have free time to stroll down Nakamise-dori, the 'Street of Inside Shops,' an alley lined with traditional vendors selling food, souvenirs and handmade crafts.

Your tour concludes with a drive back to the pier.

The drive between Yokohama and Tokyo is approximately 60 minutes each way subject to traffic. Entry onto the Imperial Palace grounds is not permitted. Japanese Yen is required for additional purchases. This tour is not recommended for passengers with walking difficulties. Tour order may vary. In Asakusa, it takes approx. 15-20 mins from Parking lot to Sensoji Temple. Part of walking at the Imperial Plaza, Sensoji temple and Meiji Jingu Shrine are uneven bare ground. A few steps are required to negotiate on the coach. Coach cannot accommodate electronic scooters.

Lunch at a local hotel or restaurant

Guided tour of the Sensoji Temple