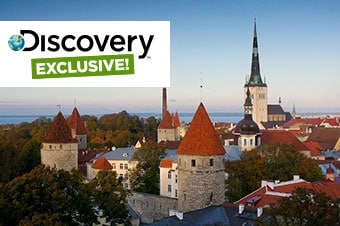 Situated high on a hilltop, Tallinn's medieval walled Old Town is a maze of cobblestone streets awaiting your discovery. This comprehensive six-hour tour introduces you to the historic and cultural charms of Tallinn, the capital of Estonia, with a perfect mix of guided tour and independent exploration.

Start by boarding your motorcoach for the short ride to Toompea Hill, where you'll begin your exploration of the historic center of Tallinn, a UNESCO World Heritage Site. In medieval times, the city was comprised of two feuding towns, separated by a dividing wall. The upper town, on Toompea Hill, was the seat of the government ruling Estonia. The lower town was a center of trade, populated with German, Danish and Swedish merchants.

Toompea Castle is a massive, medieval stone castle that tops Toompea Hill and houses Estonia's current parliament. Pikk Hermann ("tall Hermann") is the tower at the corner of the castle, 150 feet tall and climbed via 215 steep steps.

From here, you will stroll to Palace Square, grandly overseen by Alexander Nevsky Cathedral, an ornate Russian Orthodox basilica topped with black onion-shaped domes. Built in the late 19th century, during a period of "Russification" in the Baltic provinces, it is a prime example of the Russian revival style of architecture. The church is named after the 13th century prince and Russian hero who defeated the crusading Teutonic knights in 1242's "Battle of the Ice" on the frozen surface of nearby Lake Peipus. Step inside the cathedral, alongside Orthodox worshippers, to respectfully view the exquisite icons and frescoes.

Nearby is also Estonia's oldest church, Tallinn's beloved Dome Church, officially St. Mary's Cathedral, founded in 1219 by Danish conquerors and first mentioned in a letter to the pope dated 1233. Its current façade dates mainly from the 15th century while the ornate copper spire was added in 1779. The cathedral is home to a fascinating collection of tombstones and carved stone sarcophagi of Estonian nobility. The "Dome Church" actually has no dome! The name originated with the German word "dom," meaning "cathedral."Continue to a scenic overlook for sweeping views over the spires of Tallinn's Lower Old Town, the site of Town Hall Square. Enjoy some brief free time here to browse for gifts and souvenirs.

You'll then head downhill, along one of the two narrow streets- the "Long Leg" and the "Short Leg" - that connect the upper and lower towns. In Lower Old Town, the heart of the old trading city, spend some free time exploring Town Hall Square, browsing for souvenirs and gifts. This spot has hosted markets since the 11th century!

The Gothic Town Hall was completed in 1404 and is topped with a weathervane depicting "Old Thomas," an ancient city guardian considered the city's enduring symbol. Across the way, you'll see picturesque, pastel-colored buildings dating from the 15th to 17th centuries - be sure to stop and take some photos at this striking spot!

It's a short walk to a local restaurant where you'll pause to enjoy a traditional lunch before touring the less discovered area of Rotermann Quarter, located just a 5-minute walk from the Old Town Gates. This unique industrial area started to develop in the 19th century and it was the location for a factory that produced starch, spirit, tables and pasta, a mill that produced bread, flour, buildings of a steam saw, and many other buildings, which have now been restored and home to many cafés, restaurants and shops. The group will tour the area and get visit to some of the houses. Finally, rejoin your motorcoach for the short ride back to port.

May steps are navigated on this tour approximately 200 in total. This tour is not recommended for guests with limited mobility..

Guests must be fit to walk on uneven surfaces, and to negotiate numerous steps at the City Theater

Walk to the Lower Old Town

Walk to the local restaurant and have lunch

Walk to the City Theatre and visit

Board the Motorcoach drive back to the port