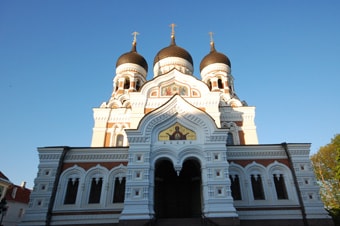 Board your motorcoach and travel picturesque country roads to historic Rakvere and its brooding 14th century castle, which is located approx 1,5h drive from Tallinn. Today this fortification, built by the warrior monks of the Livonian Order in 1346, is both historic ruin and medieval experience centre. Tour the castle and view its catapults and working cannon. Explore the expansive dungeons including its Torture and Hell Chambers, complete with examples of medieval forms of torture. After tasting some local vodka, lunch is served at the castle's inn.

Following your meal, board your coach for the return drive to Tallinn and a guided walking tour of Toompea Hill. A UNESCO World Heritage Site, Toompea Hill is named after the massive, medieval stone castle that is today home to Estonia's parliament. Standing next to the castle is Pikk Hermann - a medieval stone tower some 150 feet in height. A huge Estonian flag foats above the tower's battlements.

Stroll to Palace Square, site of Alexeander Nevsky Cathedral. The Russian Orthodox basilica, complete with golden crosses and black onion-shaped domes - was built in the late 19th century during a period of "Russification." The church is named after the prince who defeated the crusading Teutonic Knights in 1242's "Battle on the Ice," fought on the frozen surface of nearby Lake Peipus. Step inside the cathedral to view the icons and mosaics lining its walls.

Your walking tour next visits Tallinn's beloved Dome Church. The oldest church in Tallinn- it is first mentioned in a letter to the Pope dated 1233 - St. Mary's Cathedral served as the burial site for nobility since the 15th century. The current façade dates from the 15th century while its ornate copper spire was added 200 years later. The cathedral boasts a fascinating collection of old unique tombstones and stone sarcophagi.

Enjoy free time to shop for souvenirs, gifts and examples of local crafts and goods before returning to the ship.

On Sundays and in the event of religious events, the Dome Church will be seen from the outside only due to church services.

Flash photography or video cameras are not permitted in the Dome Church or Alexander Nevsky Cathedral.

Euro is the currency of Estonia. US currency is not normally accepted at many of the venues. Credit cards or Euros are recommended when shopping for souvenirs.

Visits to the Torture and Hell Chambers are non-guided and optional.

Guests must be fit to walk on uneven surfaces, and to negotiate numerous steps in Rakvere.

Drive through Estonian countryside to Rakvere