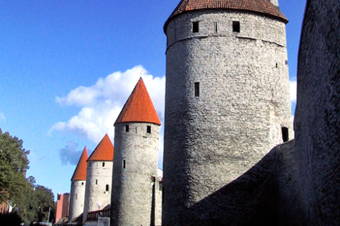 Colossal stone towers, glittering golden crosses, and gleaming copper spires rise above the rooftops of Upper and Lower Old Town. And one of the best ways to experience all the beauty and history Tallinn has to offer is with this four hour walking tour. Be sure to wear comfortable walking shoes and don't forget to bring along a camera to capture each memorable sight.

After boarding your motorcoach, you'll disembark near Toompea Hill, which sits in the central part of the city. Tallinn was once two feuding medieval towns separated by a wall. Your guided walk will take you to the upper town, which was the seat of government that ruled over Estonia called Toompea, and the lower town, which was a Hanseatic trading center.

From Toompea Hill, it's just a short walk to Palace Square, home of Toompea Castle. Perched on a limestone cliff, Toompea Castle has always been the seat of power in Estonia since the 13th century, and is the current home of Estonia's Parliament. On the southwest side of the castle stands the 150-foot tall Pikk Hermann Tower.

Opposite the castle is the colorful Alexander Nevsky Cathedral. Built in 1900, the façade of the Russian Orthodox basilica features stunning golden crosses and black onion-shaped domes and serves as a testament to the influence of years under the rule of Russian Tsars in Estonia. Step inside the cathedral to view the magnificent icons and mosaics that line its walls.

Your stroll continues to St. Mary's Cathedral, the oldest church in Tallinn and mainland Estonia. Originally established by the Danes in the 13th century, and built and rebuilt during the following 200 years, the church's simple white exterior is topped by a gleaming copper spire. Renowned as the burial site for nobility since the 15th century, St. Mary's boasts a fascinating collection of noble tombstones and stone sarcophagi.

Continue to Kiek in de Kok Tower. You will get to admire the strenght of the people, who lived in the medieval days as you climb 150 steps up to the Kiek in de Kök Tower. The tower's unusual name literally means 'Peep into the Kitchen.' The structure was so high that medieval guards joked they could see right down the chimneys and into the kitchens of the houses below. This 15th century tower originally served as an artillery tower, but has now turned into a museum, which you will now visit. An addition to examples of medieval firepower, there are displays detailing how the city's system of walls and towers developed through the centuries.

From here you will continue to the Lower Old Town to visit the Town Hall Square, the social heart of the town. Before returning back to the port, you will walk to Towers' Square, where you can admire the town wall towers as well as church spires.

Wear comfortable walking shoes and clothing suited to the day's conditions. Bring a hat and a light jacket.

Tour buses are not allowed to drive inside the Old Town. The walking distance from the bus parking to the Old Town may vary as it is up a hill.

The visit to the upper levels of the Kiek in de Kok Tower is without the tour guide.The inside visit to the Dome church is not available on Sundays and during religious events.

Walk to and visit Kiek in de Kok