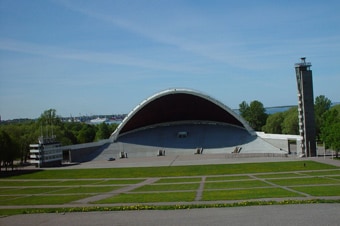 Experience Tallinn, Estonia's Capital City, on a narrated drive and short walking tour. Drive to the Song Festival Ground. This concert arena can accommodate 30,000 singers on its vast stage and is home to Song Festival, an Estonian tradition since 1869. The tour will stop at this impressive venue for a photo opportunity. Continue the drive through several residential areas including quaint single family neighborhoods and Soviet style apartment blocks. Next head to the memorial to victims of communism which is is dedicated to all Estonian people who suffered under the terror inflicted by the Soviet Union.

Drive around the Old City's medieval walls, gates and watchtowers before continuing to the modern city, passing the Opera and Ballet Theater 'Estonia,' the Concert Hall and the Viru Center. Finally, disembark your motorcoach near Toompea Hill for the short walk into the Upper Town of Old Tallinn.

Toompea which is also referred to as 'Upper Old Town' is the home of some of Tallinn's oldest architectural wonders. From Toompea Hill, take a short walk to Palace Square. In the square you will see Toompea Castle, the current home of Estonia's Parliament. On the southwest side of the castle stands the Pikk Hermann Tower, topped by the national Estonian flag of blue, black and white.

Next is an optional visit a historic Russian Orthodox Cathedral. Alexander Nevsky Cathedral serves as the dominating landmark in Palace Square. This cathedral serves as a living relic of the Russian Empire, and a strong testament to the influence of years under the rule of Russian Tsars in Estonia. Gaze towards the sky to witness the cathedral's cupolas and golden crosses rising high above the rooftops of the Upper Old Town. You will have a chance to step inside this working cathedral to view the golden icons and mosaics, which still line the walls today.

Finally, board your motorcoach and return to the ship.

There are 15 steps required to enter Alexander Nevsky Cathedral. Passengers who do not wish to visit the cathedral may stay with the bus or in Palace Square.

Flash photography or video cameras are not permitted in the Alexander Nevsky Cathedral.