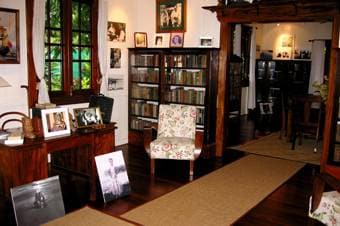 Your tour continues to the James Norman Hall Museum, co-writer of the famous "Mutiny on the Bounty" trilogy and other novels made into Hollywood movies. Inside is the library with the original wooden desk and typewriter, as well as over 3,000 books representing seven generations of American literature, antique furniture, nostalgic family photos and favorite paintings.

You'll make a photo stop at Orofara Lookout Point and at the Tomb of Pomare V, the last king of Tahiti. Before returning to the ship, see city highlights such as the Chinese cemetery and temple, the Presidential Palace and government buildings.

Re-board motorcoach and return to ship