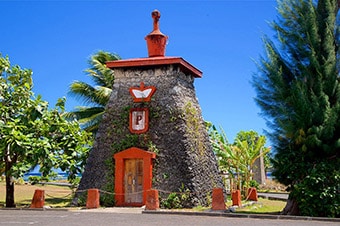 Mara'a Fern Grotto
It's no wonder the French painter Paul Gauguin found inspiration while swimming in this cool-water grotto. Set deep in a cliff and reached through a meandering pathway, the Mara'a Fern Grotto is obscured by huge elephant ear ferns, taro and lush vegetation. Walk in the caves and gaze up at the overhead springs that seep through the ceiling and splash into the crystal-clear pools of water that shimmer below.

Vaipahi Gardens & Waterfall
In the Tahitian native language, Vaipahi means splashing waters from waterfall. This private property is a magical spot, perfumed by local fruit trees, blooming flowers, a smattering of archaeological relics and over 75-species of vegetation. Punctuating the greenery is a sparkling cascade set deep within the jungle-like setting.

Blowhole Arahoho
An archaeological phenomenon, the Arahoho Blowhole is a lava tube created when hot lava flowed into the cold ocean. When waves crash through the volcanic basalt rock, the air traps inside and sends the sea spray into a powerful geyser. The bigger the waves, the more dramatic the effect, but mind the overspray – you will get wet.

Point Venus
Tahiti's northernmost extremity, Venus Point was the site from which Captain James Cook's astronomer tracked the transit of Venus across the sun in the 18th century.

Tahara'a "One Tree Hill"
When Captain James Cook sailed the HMS Endeavor into Tahiti's Matavai Bay in 1769, a single tree with bright red-orange flowers served as a beacon perched high above the bay on a promontory. This organic navigational landmark was the inspiration for the name "One Tree Hill," and although the old tree has long since disappeared, the lookout remains and offers panoramic views of the Island of Moorea, the Sea of Moons and the surrounding coral reefs and lagoons.

What you see along the way:
The 72-mile road circling Tahiti ribbons through the local villages of Maha'ena, Hitia'a, and Fa'aone to the isthmus of Tarava'o, where the larger island of Tahiti Nui joins the smaller island of Tahiti Iti.
Photo opportunities:

From Point Venus, photograph the iconic beach below, anchored by the stately white lighthouse, which was built in 1868.

Refreshment:
At Gauguin Restaurant, enjoy a beverage of your choice (juice, soda, bottled water) while taking in the stunning views of the lagoon and Tahiti Iti in the distance.

It is recommended to bring sun protection, sunglasses and insect repellent .