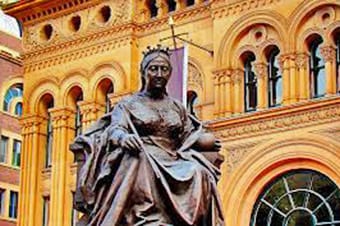 Your narrated drive begins at the pier where we'll travel to The Rocks, Sydney's birthplace and historic city center. The Rocks was established shortly after the colony's formation in 1788. The original buildings were made mostly of sandstone from which its name is derived. Now a popular tourist attraction, The Rocks features galleries, shops and pubs with several historic drinking establishments claiming to be the oldest in Sydney.

Continuing on through the city, your tour takes in Hyde Park, Domain and the Botanical Gardens. We'll drive through Kings Cross, the reputed red light district, and on to Rushcutters Bay, home of the Royal Cruising Yacht Club. We'll also pass through the affluent communities of Double Bay and Rose Bay. Along the way, we'll stop for photo opportunities at Mrs. Macquaries Chair for stunning views. The vantage point is directly east of the Opera House, on the eastern edge of the Royal Botanic Gardens and provides excellent views west across the harbor to the Harbour Bridge and the mountains in the far distance. Looking north and east you can see Kirribilli House, Pinchgut Island and the Navy Dockyards at Wooloomooloo. Afterwards, we'll head to Bondi Beach, one of Sydney's most eclectic precincts and the most celebrated beach in the country.

Continue panoramic sightseeing and transfer to the Airport