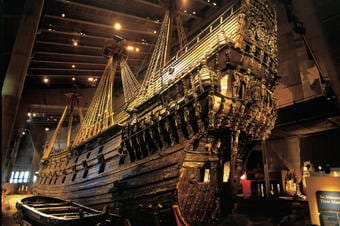 Your tour begins as you board your motorcoach for a scenic drive to the Vasa Museum, a museum built specifically to house the Vasa, the oldest fully preserved ship in the world. En route, you'll pass Gamla Stan, the Old Town where Stockholm began over eight centuries ago. You'll witness its many historically significant buildings and landmarks.

Upon arriving at the Vasa Museum, you'll witness the historic vessel with more than 95 percent of the ship in its original form. In 1628, the too thin, too tall Vasa sailed for less than 20 minutes when the wind caught her sails and toppled the warship. The ship sank almost immediately and stayed in the mud of the Stockholm harbor for over 300 years before she was raised in 1961. Not only was the ship perfectly preserved in the brackish water of the Baltic Sea, but over 12,000 artifacts were also recovered. After a guided tour, you'll explore the museum's other exhibits and displays of historic items recovered from the harbor floor. Souvenir shopping is also on the agenda.

Next, you'll drive to Sigtuna, a quaint and idyllic little town, with colorful old wooden houses, tiny shops and narrow streets. Along the way, you'll take in the lovely green countryside and rural settings, including historic landmarks and the smallest town hall in Scandinavia, dating from 1744.

In Sigtuna, stroll down Stora Gatan, the oldest street in Sweden, past the smallest Town Hall in Scandinavia. You'll take a guided walk of the Church of St. Mary's, a 13th century church, still the parish church for the town (subject to no service being held). Before departing, you'll have time to browse or shop in small gift and craft shops along Stora Gatan.

You'll board your motorcoach for a panoramic drive around Sigtuna before departing for the pier.

On Saturdays, stores close between 2 p.m. and 4 p.m. Many stores are closed on Sundays; shopping is limited.

The Church can be closed for private functions

Return back to Stockholm for guided tour of Vasa Museum