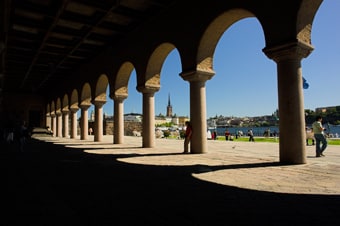 Your tour begins as you board your motorcoach for a scenic drive to Stadshuset, Stockholm's City Hall, where you'll take a guided walk through this massive, fortress-like red brick structure. The building is crowned with a tower and a cupola topped with the three golden crowns of historic Sweden, the Swedish national coat of arms. Behind the magnificent facades are offices and session halls for politicians and officials, as well as assembly rooms and unique works of art. You'll make your way to the Blue Hall, scene of the annual Nobel Award banquet, and the Golden Hall, with its 18 million gold mosaic tiles illustrating Swedish history. Before departing, you'll have a short free time for shopping for specially designed souvenirs and presents that commemorate City Hall and Stockholm.

Next, you'll board your motorcoach for a panoramic drive through the city center. During your city drive, you'll pass the neighboring island of Djurgården, regarded as Stockholm's outdoor recreation center, and such historic sites as the National Museum and the Royal Dramatic Theater.

You'll continue on to the Vasa Museum, a museum built specifically to house the Vasa, the oldest fully preserved ship in the world, with more than 95 percent of the ship in its original form. The too thin, too tall Vasa sailed for less than 20 minutes when the wind caught her sails and toppled the warship. The ship sank almost immediately and stayed in the mud of the Stockholm harbor for over 300 years before she was raised in 1961. Not only was the ship perfectly preserved in the brackish water of the Baltic Sea, but over 12,000 artifacts were also recovered.

After a guided tour, you'll explore the museum's other exhibits and displays of historic items recovered from the harbor floor. Souvenir shopping is also on the agenda.

You´ll continue to Gamla Stan, the Old Town where Stockholm began over eight centuries ago, for a brief, guided walking tour. As you wander with your guide, savour the romantic atmosphere and sense of antiquity in buildings dating from the 16th to the19th centuries with baroque doorways and regal coats of arms. See the Stortorget - the hub of the Old Town, dominated by the old Stock Exchange, now home of the Nobel Museum and the Swedish Academy, whose members every year decide the laureate of the Nobel Prize for Literature.

Your tour concludes with a scenic drive back to the pier.

The City Hall can close on short notice for private functions.

There are approximately 50 steps at the City Hall.

Depart from ship for scenic drive enroute to City Hall