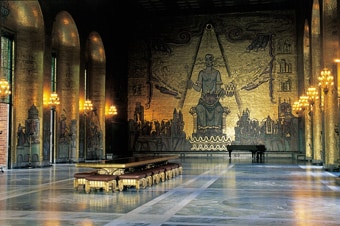 Your tour begins as you board your motorcoach for a short drive to Gamla Stan, the Old Town where Stockholm began over eight centuries ago.

Upon arriving, you'll join your guide for a narrated walking tour, strolling the narrow, cobbled streets, witnessing buildings from the 16th to 19th centuries. Your first stop is the Nobel Museum, located in Stockholm's original Stock Exchange building. The museum, opened in 2001 to celebrate the 100th anniversary of the Nobel Prize, features the portraits and prize citations of all the 700-plus winners. Together with your guide, you'll walk through the history of the 20th century Nobel Laureates and learn more about the Nobel Prize and its founder. You'll also have time to browse in the museum shop for souvenirs.

Your tour continues with a scenic drive to Stadshuset, Stockholm's City Hall. The massive, fortress-like red brick structure is crowned with a tower and a cupola topped with the three golden crowns of historic Sweden, the Swedish national coat of arms. Behind the magnificent facades are offices and session halls for politicians and officials, as well as assembly rooms and unique works of art. You'll make your way to the Blue Hall, scene of the annual Nobel Award banquet, and the Golden Hall, with its 18 million gold mosaic tiles illustrating Swedish history. Before departing, you're free to shop for specially designed souvenirs and presents that commemorate City Hall and Stockholm.

Next, you'll travel to Fjällgatan, one of Stockholm's highest points, offering panoramic views of the city skyline and its graceful waterways. Here, you'll marvel at the breathtaking scenery as you capture a photo or two.

Your tour concludes with a walk back to your motorcoach, and a relaxing drive back to the pier. With Stockholm behind you, you leave with a myriad of unforgettable memories of a lifetime.

The photo-stop at Fjällgatan is subject to traffic conditions.

The City Hall can closed on short notice for private functions.

Depart from ship for a guided walking tour of Old Town

Guided tour of the Nobel Museum