Vikings to the Vasa: a Journey into the Past 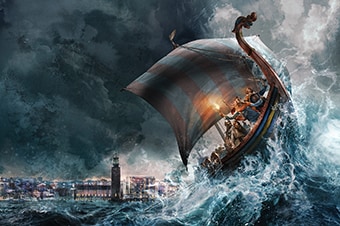 What you will visit:
Viking Museum
Modern technology collides with ancient history at this incredible interactive museum filled with 3D attractions, illusions, holograms and fantastical displays. The museum's top attraction is a thrilling, 11-minute long, train ride through the dark that transports passengers through countries and landscapes and thrusts them into one of history's most mythical times. The story is told through the experiences of characters from the year 963 who set out on a dramatized historical expedition to save their family's livelihood. The ride is recommended for ages 7 and up.

Vasa Museum
Continue through the City Center for panoramic views of the area, and cross into the neighboring island of Djurgarden, where splendid parklands and gardens greet you in this area known as Stockholm's outdoor recreation center. Djurgarden is home to the famed Vasa Museum, which you'll have ample time to explore. Step inside for a unique opportunity to view the Vasa, a 226-foot-long warship that sank on its maiden voyage in the middle of Stockholm Harbor. Poorly designed and top-heavy, the Vasa sailed for only about one nautical mile before plunging to a watery grave in 1628. Over 300 years passed before she was
raised from the harbor in 1961. Due to the unique chemical makeup of the Baltic Sea, the ship suffered relatively little decay. This fact, combined with the careful preservation techniques of the ship's restorers, resulted in an ancient ship that is almost 95 percent in its original form

Old Town, Stockholm
Encompassing 14 islands, interlaced with more than 50 bridges and overlooking the Baltic Sea, Stockholm is the proud capital of Sweden. More than 700 years of history comes alive in the city's grand public buildings, cultural attractions and cobblestone streets of Gamla Stan, its famed Old Town. Here, narrow streets lined with buildings from the 16th to 19th centuries showcase such sights as the Great Cathedral, the city's oldest church that is home to the renowned 15th-century sculpture of St. George slaying the dragon; the Royal Palace, currently housing the offices of the Royal Court of Sweden; Stockholm's medieval cathedral; and the dramatic Parliament House with a baroque revival-style façade.

What you will see along the way:
A panoramic sightseeing tour of Stockholm, heralded as one of the most beautiful cities in the world, includes the gracious Royal Palace, which crowns the island. The waterfront is dotted with colorful old homes, and the city center is alive with trendy boutiques and cafes. Must-see attractions include over 80 museums including the Vasa Museum, the boutiques along Drottninggatan, the spectacular Royal Palace and prestigious Strandvägen along the sparkling waterfront, and Gamla Stan, the historic Old Town.

Board your motorcoach and drive to Stockholm including sightseeing

Arrival at the Vasa Museum and inside visit.

Walk from the museum to Life of Vikings museum/exhibition

Guided introduction of Museum, train ride and free time to explore on your own

Board your motoroach for Old Town

Free Time in the Old Town