Vasa Museum & Time On Your Own 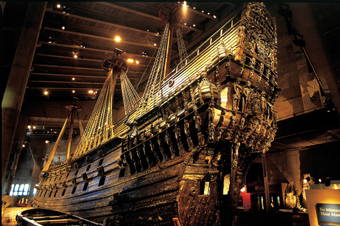 Discover Stockholm's 750 years of history, art and culture when you begin your day with a comprehensive motorcoach tour of this beautiful city, spanning 14 separate islands connected by more than 50 bridges.

Begin in Gamla Stan, Stockholm's Old Town founded in the 1300s. In this exceptionally well preserved medieval district, meandering streets lined with antique shops and cafes lead the way to spectacular Stockholm Cathedral, the city's oldest church and the site of many royal weddings, funerals and coronations from the 13th century to the present. Here, you will also find the dazzling 13th century Royal Palace, currently housing the offices of the Royal Court of Sweden. Walk down Vasterlanggatan, Old Town's number one tourist street, see Stortorget, the charming center square, and view many other 17th and 18th century landmark buildings and monuments.

Continue through the City Center for panoramic views of the area, and cross into the neighboring island of Djurgården, where splendid parklands and gardens greet you in this area known as Stockholm's outdoor recreation center. Djurgården is home to the famed Vasa Museum, which you'll have ample time to explore. Step inside for a unique opportunity to view the Vasa, a 226-foot-long warship that sank on its maiden voyage in the middle of Stockholm Harbor. Poorly designed and top-heavy, the Vasa sailed for only about one nautical mile before plunging to a watery grave in 1628. Over 300 years passed before she was raised from the harbor in 1961. Due to the unique chemical makeup of the Baltic Sea, the ship suffered relatively little decay. This fact, combined with the careful preservation techniques of the ship's restorers, resulted in an ancient ship that is almost 95 percent in its original form.

The museum houses 11 permanent exhibits, each dedicated to a different aspect of the ship's history. Thousands of artifacts found on board the Vasa are on display. Learn about how the crew would have lived on board, delight in the ship's fine sculptures and detail, and read about the people on the ship who died tragically.

At the completion of your museum visit, re-board the motorcoach for a drive through Diplomat Town and Östermalm, a fashionable neighborhood of stately apartment buildings before you'll enjoy free time for lunch and independent exploration down-town. Your day concludes with a pleasant drive back to the pier.

Guide will meet at the pier but time on own and transfer back to Nynäshamn is unguided.

Vasa Museum for a guided walking tour of the Old Town