Stockholm On Your Own 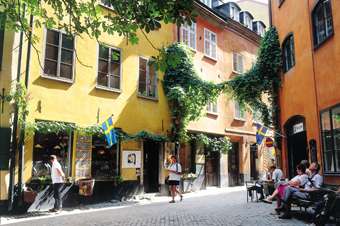 Grab your guidebook and camera for your exciting day of independent exploration of Stockholm, one of the most beautiful cities in the world.

The motorcoach will bring you to the lively City Center area, the gateway to many of Stockholm's most popular attractions. You'll have 5 1/2-hours to explore this fascinating city on your own. Stockholm is pedestrian-friendly and has an excellent public transportation system.

The district known as Gamla Stan, Stockholm's enchanting Old Town, is a must-see. Narrow, cobbled streets are lined with buildings from the 16th-19th centuries. Here, you can visit such sights as the Great Cathedral, the city's oldest church and home to the renowned 15th century sculpture of St. George slaying the dragon, and the Nobel Museum located in Stockholm's original Stock Exchange building.

Keep your camera handy as you view the 13th century Royal Palace from the exterior, currently housing the offices of the Royal Court of Sweden. You'll want to walk down Vasterlanggatan, Old Town's number one tourist street, brimming with souvenir shops and restaurants, and you won't want to miss the alley of Marten Trotzig, which has the distinction of being the narrowest alley in Stockholm, with sections only 35.4 inches wide.

Another premier destination is the beautiful neighboring island of Djurgården, an exquisite oasis of parks, gardens and canals that has been royal land since the 15th century. Djurgården is best known for the great Vasa Museum, where you can relive the historic events of the Vasa, considered one of the world's most important warships. Eleven permanent exhibits is at display, and multimedia exhibits chronicle the history of this triumphant-turned-tragic maritime behemoth.

One of the most fascinating buildings in Stockholm is the Stadshuset, Stockholm's City Hall. This massive, red brick structure is ornamented with a tower and a cupola topped with the three golden crowns of historic Sweden. Peer into the Blue Hall to see the setting of the annual Nobel Award banquet, and the Golden Hall, where 18 million gold mosaic tiles ornately illustrate Swedish history. The only way to visit the City Hall is by taking part in a guided tour. Therefore there are no general opening hours, but the building is open for visitors when a public guided tour is available.

When you're in need of refreshments, you'll find a plethora of wonderful cafes and restaurants in Stockholm, one of Europe's most eclectic "foodie" scenes. If you don't want to pause for a sit-down meal, stop at a street vendor or one of Stockholm's food halls, where you'll enjoy traditional Swedish food, known as husmanskost, Although vodka is the drink most associate with Sweden, locals favor an ice-cold potato liquor with a spicy flavor called Aquavit. But be careful, it packs quite a punch!

At the completion of this exhilarating day, return to the designated pick-up location and enjoy a relaxing motorcoach ride back to port while chatting with fellow travelers about the amazing sights you visited.

The City Hall can only be visited with a guided tour. Several offered daily.

Depart from pier in Nynäshamn for scenic escorted drive to Stockholm