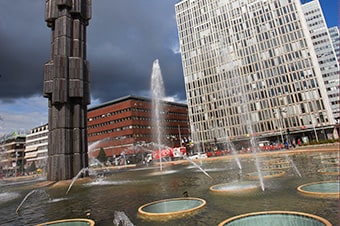 Your tour begins as you board your motorcoach for a relaxing drive through the Stockholm countryside before reaching the city limits to start your panoramic drive through the city districts of Gamla Stan, Södermalm and Östermalm, each with its own distinct character. Keep your camera ready, as photo opportunities abound at virtually every turn.

Pass the Royal Palace, Royal Opera and the Parliament building as your tour continues with a drive past the city center, the focal point of modern Stockholm and Östermalm, a fashionable neighborhood of stately apartment buildings. You'll continue across the Western Bridge for a magnificent view of Riddarfjärden bay and Stadshuset, Stockholm's City Hall, by the waterside. On Södermalm, the large island of Stockholm's south side comprised of a number of small closely integrated neighborhoods, you'll make a photo stop at one of Stockholm's viewpoints offering panoramic views of the city skyline and its graceful waterways.

Be one with the sky as you ride one of the most remarkable attractions in Sweden - the SkyView. The Ericsson Globe Arena, resembling a giant golf-ball, is the largest spherical building in the world. An exhilarating two-minute ride will take you to the top of the Globe. At 130 meters above sea level, the "bubble" will stop for you to have ample time to marvel over the magnificent view over the city.

Guide will meet at the pier but transfer back to Nynäshamn is unguided.

It should be added that the tour order may vary.

Skyride not recommended for those with fear of heights