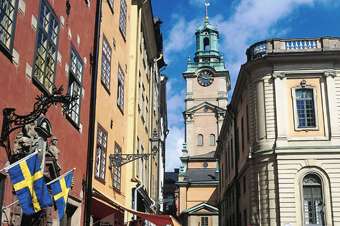 Your panoramic tour begins with a motorcoach ride to Stockholm that takes you across the Western Bridge for breathtaking views of the city's skyline. Your first stop is a visit to the magnificent City Hall.

Commanding the shores of Lake Mälaren, City Hall was inaugurated in 1923 after 12 years of work by an elite team of construction workers, sculptors, artists and craftsmen. It is renowned not only for its architecture, but for its stunning murals and mosaics. Experience the spaciousness of the Blue Hall and the grandeur of the Golden Hall, which incorporates 18 million gold tiles. You won't be surprised to discover that City Hall is the site of the annual Nobel Prize banquet.

Then it's off to Djurgården, known as Stockholm's recreation area, royal land since the 15th century. Djurgården is home to the Vasa Museum, where you can relive the historic events of one of the world's most important warships. Constructed from 1626 to 1628, the Vasa sank during her maiden voyage after having traveled only one nautical mile. Though her top-heavy design doomed her, the Vasa is now seen as a nostalgic symbol of the era in the 17th and 18th centuries when Sweden was a world power. The ship was retrieved from the bottom of the sea in 1961, and thousands of artifacts were found. View these items and the majestic ship itself, which has been restored to much of its former glory.

Followed by a scenic drive through picturesque Djurgården, head off to the Old Town, or Gamla Stan, here you'll enjoy a typical Swedish lunch before taking off for a narrated tour of Stockholm's oldest quarter. Here, your guide will tour the 13th century Royal Palace, currently housing the offices of the Royal Court of Sweden. See the exterior of adjacent Great Cathedral, the city's oldest church and the site of many royal weddings and coronations. Continue along the cobblestoned streets for views of a variety of 16th-19th century buildings and monuments.

At the completion of your walking tour of Old Town, you'll have 45 minutes to explore on your own. Check out Vasterlanggatan, Old Town's number one tourist street, and Marten Trotzig Alley, the narrowest alley in Stockholm, with sections only 35.4 inches wide.

After your independent exploration, re-board the motorcoach before concluding with a short drive to your ship.

The drive between Nynashamn and Stockholm is approximately one hour. Guide will meet at the pier but transfer back to Nynäshamn is unguided.

The Royal Palace and City Hall can be closed on short notice for private functions.

This tour is not recommended for persons who have difficulties walking or wheelchair confined.

Depart Vasa for drive to local restaurant for lunch