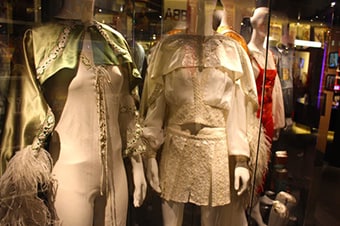 Depart from the pier, driving through the Swedish countryside towards the city where you will begin a panoramic sightseeing tour. The comfortable motorcoach travels along Strandvagen, a spectacular wide boulevard created in the second half of the 19th century, and continues to the neighboring island of Djurgarden for views of its splendid gardens, parklands, Vasa Museum and the spectacular new ABBA the museum.

ABBA fever is alive and well in Stockholm, and you can experience all the music, stories and clothing of this legendary band in their very own museum built in 2013. Upon arrival, embark on a 90-minute, informative, self-guided audio tour that takes you through the sprawling career of this sensational band whose sales have topped 400 million albums around the world.

ABBA The Museum features displays that span the band's career, starting in the 1970s with their breakthrough song 'Waterloo' in 1974. As you tour the galleries, you'll learn more about their grand worldwide tours, the events leading up to their split in 1983 and how ABBA lives on in such projects as the spectacular stage show and feature film Mamma Mia!

ABBA The Museum offers much more than static displays of costumes, gold records and memorabilia. The museum highlights the band's meteoric rise to stardom, and members of the original band were involved in the development of the museum, ensuring visitors would experience what it was like to be a member of the band! Enter the replica of Polar Studio, where the band recorded, and see and touch the equipment used in the original studio. Dance to the songs you love on a flashing dance floor, sit behind the controls of the famed helicopter from the 'Arrival' album cover and 'perform' with the band in a high-tech hologram show!

At the completion of your museum visit, rejoin the motorcoach and continue your panoramic sightseeing tour through Stockholm's city center and medieval section known as Old Town. As an added bonus, your guide will point out ABBA-related sites, such as City Hall where Benny performed for the very first time, the Royal Opera, scene of ABBA's legendary 1976 royal wedding gala performance, and the homes of some of the band members.

After having free time to lunch and to enjoy the city on own, your rock 'n' roll tour of music and memories concludes with a relaxing motorcoach ride back to port.

The drive between Nynashamn and Stockholm is approximately one hour. Guide will meet at the pier but transfer back to Nynäshamn is unguided.

Panoramic drive enroute to Djurgarden and Abba the Museum

Visit to Abba the Museum - self-guided tour via audio-guide