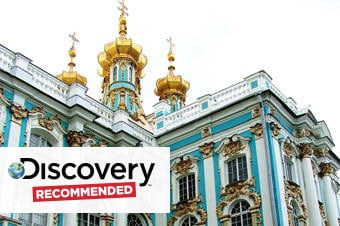 This full day excursion starts when you board your motorcoach at the pier for a fascinating drive to one of the city's largest streets, en route to Tsarskoye Selo, a former summer residence of the tsars.

Accompanied by your guide, you will have a chance to walk through Catherine Park and around the awe-inspiring palace. Designed by Rastrelli, this ornate Baroque building is over 1,000 feet long and boasts a rich blue façade. Wander through the Throne Room, the famous Amber room which was once considered to be "the Eighth Wonder of the World", the Portrait Hall, the Crimson Pilaster Room, and admire the building's spectacular domes that crown the palace's north end. You will also be able to view the gallery of Greek and Roman heroic busts that decorate a covered walkway designed for Catherine the Great.

Leaving this unique landmark, you will then head to a local restaurant for a delicious lunch, which includes Russian sparkling wine, vodka, red caviar and a performance from a traditional Russian folk group.

Back on the motorcoach you will then enjoy a brief photo stop at the two impressive Rostral Columns that sit on the Neva River, and were originally built as lighthouses, before driving around the university in the Decembrists' Square, past the Bronze Horseman.

Your next stop is St Isaac's Cathedral, famous for its massive central gold dome that dominates the St Petersburg skyline, and is one of the largest in the world.

The afternoon continues with a cruise past the Admiralty to the Hermitage, which is situated in the centre of St Petersburg and features a striking gold spire. The motorcoach will stop here if the Palace Square is open, and then with no time to spare, you will continue on to your next destinationl, the Church of the Savior on Spilled Blood, for another exciting photo opportunity. This recently restored Russian-style church was originally constructed in 1883 under Alexander II, as a memorial to his father and features more than 7500 square meters of mosaics.

Throughout the day, you will have the chance to browse for souvenirs, and bargain with local vendors at the various stops, before heading back to the ship laden with gifts and new memories.

Catherine Palace is closed on Tuesdays and the last Monday of the month, but will be open by special arrangement for tour participants.

Camera and video fees for the Catherine Palace are included in the tour.

Protective overshoes are required inside Catherine Palace; these will be provided.

This tour is not wheelchair friendly due to the amount of steps to climb and walking involved.

Depart from ship for a guided tour to Tsarskoe Selo

Tour of the Catherine Palace and the park

Drive past the Bronze Horseman

Drive past the Admiralty and the Palace square