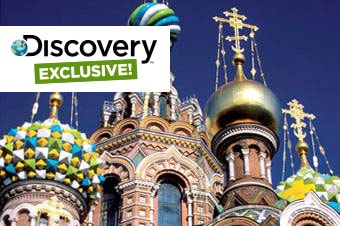 St. Petersburg's fascinating history comes alive the moment you board your motorcoach. After a brief journey through the city you'll visit the Peter and Paul Fortress. Built by order of Peter the Great in 1703 to protect the city from Swedish attack, the fortress later became a political prison. Trotsky, Lenin's older brother Alexander, Dostoyevsky, and Peter's own son, Alexei, were once held inside these walls.

In the center stands the impressive 280-year old Peter and Paul Cathedral, the burial place of Russian Emperors and Empresses from Peter the Great to Alexander III. A much-beloved city landmark, it was the first church in St. Petersburg to be made of stone.

Your next destination is the renowned Hermitage Museum. Comprised of the Winter Palace and four other buildings, the Hermitage is home to one of the world's greatest art collections. Your knowledgeable guide will lead you through the magnificent display rooms including the Gold Room. Here, you'll see a stunning collection of classical antiquities, and 17th and 18th century jewelry created for the imperial court.

Then, it's a stop at one of the city's best restaurants for a delicious Russian lunch, which includes Russian sparkling wine, vodka and red caviar.

After your meal, you'll visit the famed Church of the Savior on Spilled Blood, site of the 1881 assassination of Alexander II. Your final stop before heading back to the ship is the awe-inspiring St. Isaac's Cathedral, which boasts a massive dome that's lavishly covered in 220 pounds of pure gold.

But your first day isn't over yet. Later that evening, you will relive elegant, 18th-century court life with a visit to the breathtaking Catherine Palace. First, you will be taken on a tour of the palaces' imperial coaches while enjoying champagne and canapés. Then you will proceed to the palace interior which includes visits to the White Vestibule, Grand Hall, the Portrait Hall, the Crimson Pilaster and the Amber Room. After "Catherine the Great" makes her entrance, you will sit down in the Throne Room for a wonderful concert of classical music and then proceed to dinner and a folkloric performance in one of the restaurants in Pushkin.

Your second day begins with a tour of the Peterhof Palace. Completed in 1725, the awe-inspiring palace and grounds are often referred to as the Russian Versailles. Situated on top of a picturesque hill overlooking the Gulf of Finland, the panoramic views include a wonderland of greenery and flowers, sweeping vistas and ornate architectural decorations.

After a delicious lunch, you will hop aboard a canal boat for a cruise along the city's canals.

Back on your motorcoach, you will visit the Yusupov Palace, site of one of Russia's most dramatic historical moments – the murder of Rasputin. After a tour of the apartments, you'll visit the cellar room where the mesmerizing monk was assassinated.

At the end of your premium two-day tour, you will return to your ship with a warm appreciation of St. Petersburg's historic and natural beauty.

The Church on the Spilled Blood is not accessible from June 1 through to July 20, 2020. A photo stop near the cathedral will still be included.

This tour is non-refundable within 7 days of the call. There will be an exclusive opening for guests booked on this tour for all Monday calls.

The Hermitage Museum requires all visitors to pass through security screening. Guests with a pacemaker must carry proof of medical exemption to avoid the screening process without exceptions. Admission will otherwise be denied into the museum.

Each of the sites included in the tour description will be visited sometime during the two days. Tour order will vary to avoid overcrowding at venues, opening and closing times or other logistical issues. Your touring on the first day will return to the ship at approximately 5:00pm which allows you to freshen up before the evening touring starts.

The fountains at Peterhof are subject to maintenance work without advance notice.

Protective overshoes are required inside the palace; these will be provided.
Evening dress code: Elegant/casual dress and low-heeled comfortable shoes that will not damage the Palace's floors.

Tour involves walking and stair climbing and is not wheelchair/scooter accessible.

Day 1 - Depart from ship for a panoramic city drive of St. Petersburg

Reception and concert of the Classical Quartet in the Grand Hall

Greetings by Catherine the Great, performance at the Court Yard

Tour of the Grand Palace in Peterhof

Visit to Peter and Paul Fortress and the cathedral

Guided tour of Yusupov Palace including a Rasputin cellar

Shopping at a local souvenir store

Re-board your motorcoach and return to your ship. You will have time to change before setting out again for the evening portion of your tour.

Tour of the Carriage Museum