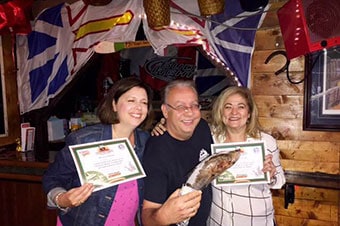 Board your comfortable transportation and begin your day with a photo stop at Cabot Tower perched atop Signal Hill, a National Historic Site of Canada. Overlooking St. John's Harbor, Signal Hill's defensive position helped defend the city from seaward attacks. It is also the site where Marconi received the first transatlantic wireless signal. From this scenic vantage point, snap some photos of the majestic city and water views and Cabot Tower, which commemorates John Cabot's voyage.

After getting your bearings, proceed to a rum tasting venue that is presided over by a colorful, costumed character who will impart how rum has been a part of Newfoundland's rich military and seafaring history. Then, "taste" history for yourself when you learn recipes and sample a special dark rum, a pirate libation called bumbo, and spirits used by the British military in WWII.

Catch a glimpse of the historic fishing village of Quidi Viddy on your way to a local pub, where the fun continues to "pour" as you turn your attention to a sampling of Newfoundland ale. This switch in your glass coincides to a switch that was made in Newfoundland when the British Navy began substituting rum with beer rations.

No trip to Newfoundland would be complete without a Screech-In ceremony, and you'll travel to a local pub where you will participate in this time-honored, local tradition. Newfoundland Screech is rum made with 40% alcohol by volume. A distinct part of local culture and lore, the funny and quite famous Screech-In ceremony is performed on visitors, or as they are affectionately referred to – CFAs (Come From Away). When you complete this time-honored ritual, you will officially be an honorary Newfoundlander!

Before beginning the ceremony, the participants are often asked to introduce themselves and where they are from. Don't be offended if you're poked fun of just a bit! You will be asked if you'd like to be a true Newfoundlander. The proper response is "yes b'y."

Then, each participant is given a shot glass of Screech. Screech is a colloquial term to describe inexpensive liquor with high alcohol content. Holding the glass, the participants are asked, "Are ye a screeched," to which they are taught the proper and rather comical reply. Just when you think that's the end of the ceremony, something "fishy" happens, but you'll just have to join in the fun to see how the whole ceremony plays out. If completed successfully, you will have been "Screeched-in" and awarded the bragging rights of being an honorary Newfoundlander!.

All itineraries are subject to change due to circumstances beyond our control. Tours may operate in reverse to avoid overcrowding at venues. Timing may be adjusted where necessary due to traffic delays, weather, or unforeseen circumstances. The tour operator reserves the right to change this itinerary without notice for the safety and enjoyment of the passengers.
Note all passengers must be able to board the transportation.

Walk from pub to Screech in Ceremony

Screech In Ceremony at the local pub

Drive back to pier