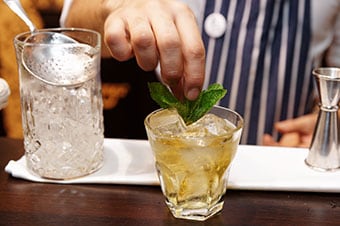 When gold was discovered in the Klondike in 1896, thousands of gold seekers known as "stampeders" came from around the world in hopes of striking it rich. Whether they found gold or lost hope, Skagway was their port of call. And the Skagway Inn was one of their favorite places to visit. And not just for the warm hospitality; during the Gold Rush era the inn operated as a brothel.

Take a peek into Skagway's notorious, rip-roaring past with a two-hour-and-thirty-minute excursion to the Skagway Inn and get a hand's on lesson in its fascinating history.

After boarding your coach at the pier it's just a short drive to the Klondike Gold Rush National Park Historic District, which boasts 15 restored historic buildings. Once you disembark you'll enter the Saloon Room where you'll be greeted by the characters from the past and treated to biographies and stories, and songs of the era played on the old-time upright piano.

Saloons and brothels were a vital part of life during the early days of the Wild West and Skagway was no exception. In fact, between 1898 and 1918 Skagway was home to 80 brothels in a town only ten blocks long!

But today, the Saloon Room is famous for the crafting of classic "Stampeder Libations." During a lively demonstration you'll learn how to make two different drinks using ingredients from the inn's own kitchen garden (choice of alcohol or non-alcohol recipes, must be 21 to drink alcohol).

Named for the "genteel ladies" who once made their home here at the inn, the more famous concoctions you may be making include Alice's Bucking Caribou Concoction or Essie's Northern Lights (garnished with edible gold). Accompanying your drinks is a menu of foods that may have seemed foreign to the average stampeder: salmon quesadillas, cheese quesadillas, mini halibut cakes, chips and rhubarb salsa, and pigs in blankets made with reindeer meat.

After you've been inducted into the "Order of the Sourdough," you'll be presented with a signature saloon glass and the drink recipes.

As you catch the shuttle for the drive back to your ship, you'll not only bring with you the memories of your day, but a recipe that you can share with friends and family upon your return home.

Minimum age is 16 with a legal guardian. Guests must be at least 21 years old and have photo ID to make alcoholic beverages.

Saloon experience with appetizers and entertainment in Saloon Room

Time at site:
01:30
Inside visit:
Yes
Air conditioned:
No