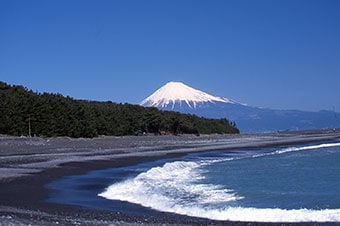 Your day of traditional art and customs begins with a short motorcoach drive to the quaint fishing town of Yui, home to the Tokaido Hiroshige Art Museum.The museum displays more than 1,300 ukiyo-e exhibits, spotlighting the works of Hiroshige Utagawa (1797-1858), one of the best-known ukiyo-e artists who strongly influenced the genre with his dramatic landscape series called "The Fifty-three Stations of the Tôkaidô" and "The Sixty-nine Stations of the Kiso Kaidô." Hiroshige's work typically features strong colors and detailed scenes of rural Japanese life in the 1800's, and his beautiful renditions of flora and birds were a departure from the typical images of the ukiyo-e genre of the Edo Period, which focused on women and popular actors.

You'll want to visit the gallery displaying a step-by-step description of the ukiyo-e printing process and one featuring the natural materials, such as charcoal, mica and oyster shells, that he used in his pigments.

After touring the museum, continue on to a tea ceremony in Miyuki-tei at a "chashitsu," a historic tearoom, in Yui Honjin Park. In the Japanese culture, a tea ceremony is not just about the beverage; it's a cultural ritual that brings tranquility and peace to the participants. The tea scent will soothe your soul as you sit down to participate in a choreographed ritual handed down through the generations. You will be served Japanese green tea, called matcha, accompanied by some sweets, which balances out the flavors of the tea leaves. Your host will be gracious, preparing your tea with great care and attention to aesthetics.

Refreshed, your final stop of the day is Miho-no-Matsubara, one of the "New Three Views of Japan" designated for its scenic beauty. Miho is a peninsula that stretched out into Suruga Bay, and Miho-no-Matsubara is the name given to the beautiful pine forest that adorns the coastline. An inspirational spot for artists and painters, its green trees are striking against the azure waters and Mt. Fuji in the background. Deep within the pine grove, there is a 650-year-old Japanese black pine called Hagoromo-no-Matsu. Its branches spread in every direction, and it is believed to have mythical origins. It is said that an angel bathing in the waters hung her clothes on the branches of this tree. A fisherman took the garment, and the angel had to win it back by dancing for him. Beside this legendary tree, there stands a monument of a French ballerina who composed a dance inspired by this legend.

It is necessary to take off your shoes when entering tea room.

The tea ceremony is limited to 15 guests at a time. Venue may be altered depending on crowd.

In case of tea room's own event, tour may be cancelled

Depart from the ship for Tokaido Hiroshige Art Museum

Reboard your motorcoach and return to the pier