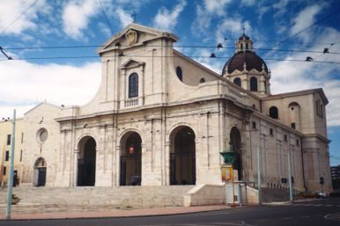 The capital of Sardinia, Cagliari is nestled on the Gulf of Angeles, high above the sparkling Mediterranean Sea. Your half-day adventure begins with an orientation motorcoach drive through the city of Cagliari to see the top sights. The first destination is the Castello, considered the most significant of the city's historic quarters.

Upon arrival just outside the walls of the Castello, disembark for your walking tour. Once a defensive stronghold founded by the Pisanos in the 13th century, the views from the hill, 60 feet above the sea, are breathtaking every way you look.

Pass through the 13th century Tower of St. Pancras, built to protect against Genoese and Moorish attacks, into the Piazza Arsenale. Stroll through the narrow streets, taking in views of the Roman Amphitheatre, Molentargius Pond, home to pink flamingos, and Devil's Saddle, a promontory that separates two gulfs surrounding the city.

Step into the well-curated Archeological Museum to see artifacts spanning millennia of Sardinian history. See displays from the nuraghic, Phoenician, Carthaginian and Roman civilizations. Don't miss the extensive collection of small bronze figurines, which intricately detail the nuraghic culture. Other highlights include Roman mosaics, a display of coinage and a collection of tombstones and busts from Cagliari.

Continue to the Cathedral of Santa Maria del Castello, a 13th century architectural gem. Little of the original gothic structure remains, with the exception of the octagonal bell tower. Today the exterior is a stunning mix of Medieval, Renaissance and Baroque architecture reflecting the trends of the times during renovations. The cathedral is flanked by two significant buildings, the Archbishop's Palace and the Governor's Palace.

Step inside the cathedral to see the interior, laid out in a Latin-cross floor plan. Look up and admire the bright frescoes, which add color to the ceilings. On either side of the aisles you will see chapels adorned with sculptures. In the center there are two huge stone pulpits, the works of Guglielmo da Pisa, donated to Cagliari in 1312. Behind the altar is the entrance to a crypt where several Savoy tombs are housed.

Conclude your formal walking tour here but enjoy a little time to shop for locally made handicrafts and sample the unique flavors of Sardinian food.

At the designated time, re-board the motorcoach and relax on a drive to the Bonaria Basilica for a photo opportunity. Built in 1325 by order of Don Alfonso of Aragon, this important religious building boasts a sandstone façade and Gothic Catalan architecture. It is home to a Madonna statue believed to have been thrown off a Spanish ship in a terrible storm. Legend tells that it washed up on the shores of Bonaria Hill and the waters calmed, saving the sailors' lives. Word spread through Sardinia, and devotion to the statue developed, especially among seafarers, who invoked its namesake as a patron.

Your travels then take you to the top of Mount Urpinu, a large and lush public park high on a hilltop that offers magnificent vistas of the entire city. From here it is a short drive back to port.

Depart from ship for a photo stop for Sanctuario di Bonaria

Photo stop for Terrazza Umberto I

Guided walking tour of Castello past the Piazza Palazzo, the Cathedral of Santa Maria del Castello, and the Viceroy's Palace

Inside visit of the Cathedral

Transport type:
Walking
Time at site:
01:00
Inside visit:
No