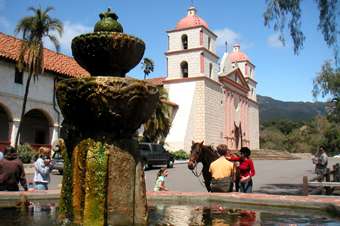 What better way to acquaint yourself with your beautiful and historic port city of Santa Barbara than by taking a tour of it on an open-air nostalgic trolley?

Step aboard your bright red trolley featuring shiny brass trim and take a seat! Equipped with large windows offering panoramic views you won't miss a thing as you set out on this unique 1.5 hour, fully narrated tour that will have discovering the enchanting seaside town known as the "American Riviera"! There's plenty to see so have your cameras handy!

With the lush Santa Barbara Mountains on one side and the sparkling Pacific on the other, your trolley ride will take you past the famous Stearn's Wharf. One of the city's most popular spots, this deep-water pier built in 1872 offers colorful shopping, dining and wine-tasting experiences as well an aquarium where you can actually touch marine life!

Pause to take in the grandeur of the landmark Moreton Bay Fig Tree, planted in 1870 and spanning 160 feet. Have your picture taken next to this massive tree to get a true perspective of its size!

Travel up State Street, the heart of Santa Barbara. Popular with locals and tourists alike, this bustling district is lined with one-of-a-kind boutiques, restaurants and cafes.

Wind through charming streets enhanced by vibrantly-colored bougainvillea en route to the palatial Santa Barbara Courthouse. Called the most beautiful government building in America this Spanish-Moorish style building was completed in 1929, and occupies a square block in downtown Santa Barbara.

Take in the white-washed adobe brick buildings of the Presidio. Erected by the Spanish when the area was still a wilderness, it was the last in a chain of four military fortresses along the coast built to protect the mission and settlers against attack.

Those with an artistic bent will surely appreciate the history of the Lobero Theater, one of California's oldest theaters founded in 1873. This architectural jewel, which once was the site of movie previews during Hollywood's golden era, is a state and city landmark.

The Santa Barbara Museum of Art is proof that one doesn't have to travel to Paris or New York City to enjoy great art. Opened in 1941 this museum is one of Southern California's finest art museums, featuring nationally recognized collections.

No tour of Santa Barbara is complete without a stop at the majestic Santa Barbara mission, founded in 1786. Set against a backdrop of rugged mountains, the mission's commanding presence and graceful lines leave no doubt as to why she is called "Queen of the Missions."

But Santa Barbara isn't all Spanish and Moorish style architecture. And that is evident as you pass along Brinkerhoff Avenue, lined with beautifully restored Victorian houses, on your way back to your Princess ship in the glistening waters of the harbor.