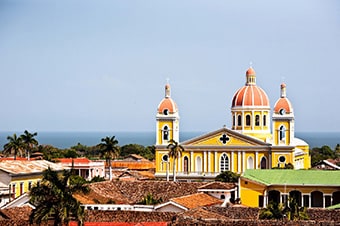 This six-hour excursion offers a little bit of everything you look for on vacation: amazing scenery, fascinating history, enchanting culture, and tropical charm. And did we mention shopping?

After meeting your guide at the pier you'll board your air-conditioned transportation bound for the colonial city of Granada. Sit back and enjoy the expert commentary as you pass the sights during your scenic 90-minute ride. But before you arrive in Granada you'll stop in the village of La Virgen, one of the few places where you can get an up close look at Lake Nicaragua, Central America's largest lake. The island you see rising from the center of the lake is Ometepe, a UNESCO Biosphere Preserve and home to two majestic volcanoes.

Back on your transportation, you'll continue through the lush countryside before making a second stop at Catarina Viewpoint. As you get out and stretch your legs you'll marvel at the panoramic views of Apoyo Lagoon Natural Reserve, which was formed by a strong volcanic explosion approximately 23,000 years ago. After you've snapped your photos, you'll have time to browse the nearby craft stalls for souvenirs.

Then, you'll continue on to Granada, also known as La Gran Sultana, founded in 1524 by the Spanish Conquistador Francisco Hernández de Córdoba. It is conveniently located near the famous Lake of Nicaragua and behind the Mombacho Volcano. Since its foundation, this city has survived the attacks and invasions from Spanish, English and Dutch pirates, making it the oldest city in Mainland America.
During the tour, you will visit the best spots in Granada such as the Parque Central (Central Park) where you will be able to enjoy the daily doings of the people as well as visit the Cathedral of Granada, which was built in 1583 only to be burnt down twice and destroyed three centuries later. Since then it has been rebuilt and restored in 1972. You will also visit the Convent of San Francisco founded in 1529 by Fray Toribio de Benavente. In March 2003 after some restoration it was opened as a cultural center, and since then features a museum and library. Throughout the city, you will also be able to enjoy the view of the colorful colonial houses with their typical indoor gardens and tiled roof, a reflection of its Moorish and Andalusian appearance.

Finally, you'll reach your final destination just in time for lunch. La Gran Francia Hotel is an architectural gem that exemplifies Nicaraguan Colonial architecture. Constructed a few years after the city's founding in 1524, the structure was destroyed by fire in 1856 and restored to the stately building you see today. Upon arriving you'll be entertained by a folkloric performance before heading into the restaurant for a Nicaraguan buffet lunch. Before boarding the transportation back to the pier, you're invited to watch a skilled craftsman as he creates items you can purchase and take back to San Juan del Sur.

Since there's so much to see and experience during the day be sure to wear comfortable clothes and walking shoes and don't forget the sunscreen and a camera to capture all the memorable sights.

Departure from the Port of San Juan del Sur

Departure to the city of Granada

Arrival at Granada for a city tour

Departure to the Port of San Juan del Sur