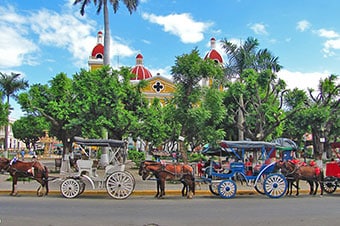 Imagine a time when conquistadors, artists, warriors, architects and townspeople walked the streets of this nearly 500-year-old city. And, of course, wealthy landowners would travel around town in a lovely, old-fashioned carriage. Experience the rich history of Granada's colonial period with your own carriage ride through the picturesque streets of one of the oldest mainland cities in the Americas.

Your exciting day of discovery begins when you board your comfortable air-conditioned transportation, bound for Granada. Sit back, relax and soak up the scenery that passes your window while your friendly guide shares his knowledge of Nicaragua with you. You may feel your anticipation mount as you learn that many of Granada's historic churches and convents have withstood the test of the centuries including invasions from English, Dutch and French pirates.
After leaving the countryside of rolling hills and verdant jungles you'll enter Granada and disembark at Parque Central, the main plaza and beating heart of the city. Then, you'll step back into a bygone era and into a horse drawn carriage. From here, it's a leisurely ride past many of the city's most recognizable landmarks beginning with the bright yellow Neoclassical Cathedral of Granada. Originally built in 1583, rebuilt and restored in 1892, the cathedral stands as one of the city's most treasured monuments.

As your carriage makes its way around the cobblestone streets, you'll be mesmerized by Granada's colorful colonial houses with indoor gardens and tiled roofs, a reflection of Granada's Moorish and Andalusian heritage.
Just a couple of blocks from the park stands the 480-year-old La Merced Church, one of the oldest churches in Central America. Destroyed by pirates in 1655, it was rebuilt with a Baroque façade between 1781 and 1783. Speaking of pirates, further on you'll see the Fortress La Polvora, which was built in 1748 to hold gunpowder in case of invasion.

Then, you'll make your way around to the famous Convent of San Francisco. Outside, the light blue façade is a welcoming invitation to the treasures held inside. A tour reveals a collection of pre-Columbian statues unearthed on local islands, an extensive library and priceless artwork.
From here, you'll travel to the nearby marina of Lake Nicaragua and step off of the carriage and onto a boat for an up close look at the world's 10th largest lake. Then, cruise among Las Isletas, an archipelago of 365 tiny islands formed eons ago from the volcanic activity of the Mombacho Volcano. Have your cameras at the ready as you indulge in the beauty of this primordial ecosystem that is home to thousands of species of exotic plants and animals-you may see colonies of howler monkeys and countless varieties of delicate orchids. Be sure to keep an eye out for the lake's most famous inhabitant, the rare freshwater shark, found nowhere else in the world except the glittering waters of Lake Nicaragua.

Back on land, you'll rejoin your transportation and travel to a restaurant for a delicious Nicaraguan meal before returning to your waiting ship.

Arrival to Granada for a horse carriage ride around the city

Depart to the Marina of Lake Nicaragua

Depart to the restaurant for lunch

Depart back to the port