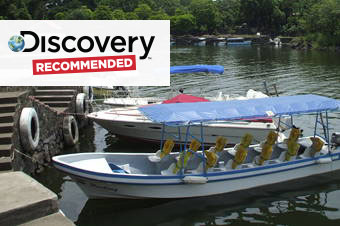 Begin your full-day, active journey of discovery aboard a comfortable, air-conditioned transportation that awaits you at your pier. As you venture forth, sit back and enjoy the beauty of the passing landscape: rolling hills, countryside and verdent plantations that are unique to Nicaragua.

Step back in time as you disembark in the picturesque city of Granada, nestled in the shadow of the majestic Mombacho Volcano on the shore of Lake Nicaragua. Founded in 1524 by Spanish Conquistador Hernandez de Cordoba, this colonial city has withstood the test of the centuries including invasions from English, Dutch and French pirates. In fact, due to its rich historical and cultural heritage, the city is in the process of being declared a UNESCO World Heritage Site.

Stroll amongst a mosaic of colonial churches, narrow streets, and Spanish-style homes with beautiful indoor patios, tiled roofs, and bright colonial colors. Enjoy a guided tour of the grand Parque Central (the main plaza) that takes you past the ornate Cathedral of Immaculate Conception, the independence square and the Convent of San Francisco founded in 1529. During your guide walk you will enjoy a folkloric presentation with dances from the colonial time including "El Gueguense."

Journey to the shores of the awe-inspiring Lake Nicaragua. This massive freshwater lake was nicknamed "La Mar Dulce" (The Sweet Sea) by Spanish Conquerors who first believed it was a sea because of its oceanic qualities: large waves, heavy storms and nothing but water at the horizon.

Board an excursion boat for a leisurely cruise among Las Isletas, an archipelago of 365 tiny islands formed eons ago from the volcanic activity of the Mombacho Volcano. A small community lives among these fertile, palm-covered islets that are a prime destination for those interested in activities such as volcano hiking, kayaking, fishing and swimming. A handful of islets are even privately owned and feature magnificent mansions.

Most of the islets, however, remain pristine and unspoiled. So have your cameras at the ready as you indulge in the beauty of this primordial ecosystem that is home to thousands of species of exotic plants and animals - among them colonies of howler monkeys and countless varieties of delicate orchids. Be sure to keep a keen eye out for the lake's most famous inhabitant, the rare freshwater shark, found nowhere else in the world except the glittering waters of Lake Nicaragua.

Following your adventure, enjoy a tasty, complimentary lunch at a charming colonial restaurant in Granada prior to returning to your Princess ship in the glistening harbor at San Juan del Sur.

Wildlife sightings, while common, are not guaranteed. The cruise portion of the tour is not narrated. Drive time to Granada is at least ninety minutes each way but may be longer based on local conditions.

Depart from ship to Granada

Lunch at a colonial hotel