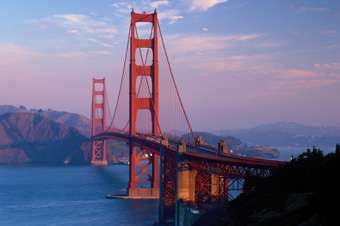 Your full-day tour begins as you board your minibus and travel west by Fisherman's Wharf and Pier 39, homeport to the Blue & Gold Fleet that offers two levels of waterfront restaurants and specialty shops.

You'll continue past the Cannery with its unique shops and restaurants, and Ghirardelli Square, once the site of the world-famous chocolate factory, now bustling with eclectic boutiques and cafés. Your drive takes you along the Marina District, an area replete with buildings, shops and restaurants, and by the Palace of Fine Arts, the last remaining building from the 1915 Panama Pacific International Exposition. Also on your route is the Presidio, a National Historic Landmark and former Army base, characterized by many wooded areas, hills, and scenic vistas overlooking the Golden Gate Bridge, San Francisco Bay and the Pacific Ocean.

The Presidio houses one of the finest collections of military architecture in the U.S. It's also the nation's largest and most ambitious historic preservation project. Approximately 469 historic buildings contribute to the Presidio's status as a National Historic Landmark District.

Then it's off to Sausalito, a quaint little town known as the "Venice of California." Located north of San Francisco, Sausalito hugs the hills above San Francisco Bay. Named by 18th century Spanish explorers for the "little willow" trees (Saucelito) found in abundance on the banks of its streams, Sausalito covers a mere two and one half miles and boasts spectacular waterfront views. Here, you'll have free time to enjoy the bay views and browse in the boutiques, art galleries, and arts and craft shops along the waterfront. There are many places to dine here, from simple to elegant.

Next, you'll drive through the Mill Valley region and onto the winding roads of the Marin Headlands, a hilly area just north of the Golden Gate Bridge, en route to Muir Woods National Monument, a 550-acre forest, home to the Coastal Redwoods, some of the tallest and oldest trees in the world. Maps will be distributed and you'll have 1 1/2 hours to independently explore the park and some of its many trails.

You'll re-board your minibus and drive to Fisherman's Wharf, home to sidewalk seafood vendors, souvenir shops and other attractions.

Order of tour stops and scenic drive may vary to avoid traffic and congestion.

The National Parks Department does not allow for guided tours through the forest as not to disturb the environment and picturesque serenity. However, Park Rangers are available to answer questions. Due to transport restrictions within the park, this tour is operated with smaller minibus transport instead of touring motorcoaches.

This tour will operate only on voyages with full-day calls; tour is not available on voyages debarking or disembarking in San Francisco.

This tour may operate in reverse direction.

Free time to shop or eat at Sausalito town center