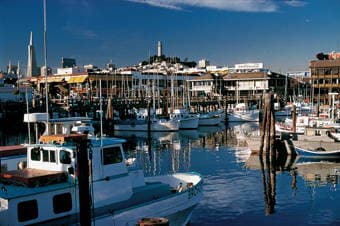 Your half-day tour begins as you board your motorcoach for a scenic drive north along the Embarcadero, the eastern waterfront and roadway of the Port of San Francisco. You'll continue past the Cannery with its unique shops and restaurants, and Ghirardelli Square, once the site of the world-famous chocolate factory, now bustling with eclectic boutiques and cafés.

Your drive takes you along the Marina District, an area bustling with buildings, shops and restaurants, and by the Palace of the Fine Arts, the last remaining building of the 1915 Panama Pacific International Exhibition.. Also on your route is the Presidio, a National Historic Landmark characterized by many wooded areas, hills, and scenic vistas overlooking the Golden Gate Bridge, San Francisco Bay and the Pacific Ocean.

Then it's off to Sausalito, a quaint little village overlooking San Francisco Bay. Located north of San Francisco, Sausalito hugs the hills above San Francisco Bay. Named by 18th-century Spanish explorers for the "little willow" trees (Saucelito) found in abundance on the banks of its streams, Sausalito covers a mere two and one half miles and boasts spectacular waterfront views. Here, you'll have free time to enjoy the restaurants and browse in the boutiques, art galleries, and arts and craft shops along the waterfront.

Next, you'll drive back over the Golden Gate Bridge to Fisherman's Wharf. You'll have an opportunity to explore Pier 39, homeport to the Blue & Gold Fleet, and offers two levels of waterfront restaurants and specialty shops, before returning to the ship. Make sure to make your way to the end of Pier 39, where hundreds of playful sea lions live on the boat docks.

Vista point to Sausalito Free time for shopping in Sausalito