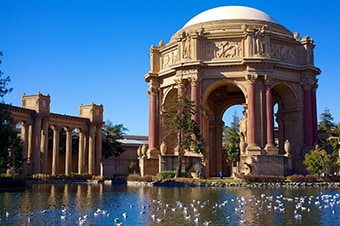 San Francisco
One of America's most picturesque cities, San Francisco is famed for its cable cars, fog-enshrined bridge, 43 hills, and delightful mix of Victorian architecture and free-spirited charms. The City by the Bay offers students of architecture a fantastic array of sights which exemplify the area's exciting and colorful history.
What you will see along the way:

Built on 43 hills, San Francisco, the 'City by the Bay,' bursts at the seams with history, culture and world-class sights. Add to that its romantic air and bold personality and you're in for a stimulating adventure both via motorcoach and on foot through its diverse neighborhoods.

Washington Square Park
Established in 1847, this popular North Beach green space is a lush, urban oasis and meeting place. Lined with cafés and restaurants, it is also the home of Saint Peter & Paul's Church.

Coit Tower
A graceful, white-concrete column situated atop Telegraph Hill, Coit Tower was completed in 1933 and has become an emblem of San Francisco's skyline.
North Beach
Steeped in rich Italian heritage, North Beach is a lively enclave known for its music clubs, art galleries and wonderful Italian cuisine.
Portsmouth Square
The "Heart of Chinatown," this square is marked with statues and plaques signifying the start of the city's robust Chinatown.
Transamerica Pyramid
Commissioned in 1969, it is one of the city's tallest buildings, towering at 853 feet. At its base is a half-acre redwood grove, the heart of San Francisco's Financial District.
Golden Gate Park
A lush park that runs more than three miles long and covers more than 1,000 square acres, Golden Gate Park is replete with museums, gardens and attractions that help define San Francisco's character.
Golden Gate Bridge
A modern Wonder of the World, the Golden Gate Bridge is the internationally recognized symbol of the city. The bridge took over four years to build and was completed in 1937. It connects the City by the Bay with the Redwood Empire to the north.

Painted Ladies
Following the Gold Rush, San Francisco entered an era of prosperity, and its brightly painted Victorian row homes, known as the "Painted Ladies," stand as a testament to the city's optimism.
Palace of Fine Arts
The last vestige of the 1915 Panama-Pacific Exhibition, the Palace of Fine Arts is an artful blend of Greek- and Roman-inspired architecture.

Palace of Fine Arts to Pier