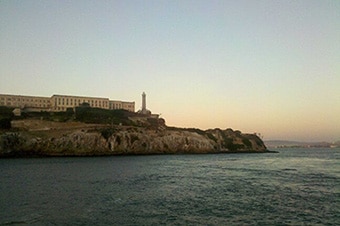 One of America's most picturesque cities, San Francisco is famed for its cable cars, fog-enshrined bridge, 43 hills, a delightful mix of Victorian architecture and free-spirited charms, plus all the hustle and bustle of a world-class city. "The City by the Bay" has it all and isn't afraid to show it.
Alcatraz Island
A ferry shuttles daring visitors to Alcatraz Island. Self-guided audio tours lead guests through the jail's facilities. Alcatraz served as a military fortification in the 1850s before becoming the infamous maximum-security prison. Alcatraz Island became a Federal Bureau of Prisons facility in August 1934. During the 29 years it was in use, the jail held such notable criminals as mobster kingpin Al Capone, Robert Franklin Stroud (the Birdman of Alcatraz) and George "Machine Gun" Kelly. Experience the small cells previously inhabited by these infamous characters and view a documentary on the history of Alcatraz.
What you will see along the way:
Begin your scenic drive along the Embarcadero, the eastern waterfront and roadway of the Port of San Francisco. Stop at Vista Point, the northern part of the Golden Gate Bridge, for views of this iconic landmark. Weather permitting, you'll be afforded sweeping views of San Francisco Bay and the city skyline. You can spy Alcatraz, Angel Island and Yerba Buena Island, two islands situated in the San Francisco Bay, as well as Berkeley, Oakland and downtown San Francisco. Continue your tour past Fisherman's Wharf, home to sidewalk seafood vendors, souvenir shops, and other attractions.
Photo Opportunities:

Alcatraz Island
The setting for many films such as "The Rock" with Sean Connery and Nicholas Cage, "Escape from Alcatraz" with Clint Eastwood, and "The Birdman of Alcatraz" with Burt Lancaster, the dark mystique of The Rock is yours to photograph, locking in memories for generations to come.

The tour is non-refundable unless cancelled 10 days prior to the call at San Francisco.

The Island can be congested based on activity in the city en route to Alcatraz. The tour guide may adjust times as need to ensure all content on the tour is covered.Passengers may have to walk from the pier to the ferry boarding location for Alcatraz. Your tour fee includes the $31 National Park Service Entry Fee. Tour has a limited availability and passengers are advised to book early to avoid disappointment.

Depart pier for Palace of the Fine Arts for photostop

Walk back to the ship at leisure