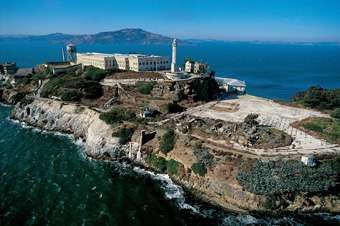 Your full-day tour begins with a short walk southward along the Embarcadero, the eastern waterfront and roadway of the Port of San Francisco. You'll make your way to Alcatraz Landing, where you'll board the Alcatraz Ferry to Alcatraz Island. Upon arriving, a National Park Ranger will provide an introduction to the infamous Alcatraz Prison prior to beginning a self-guided audio tour through the jail's facilities.

Alcatraz Island became a Federal Bureau of Prisons federal prison in August 1934. During the 29 years it was in use, the jail held such notable criminals as mobster kingpin Al Capone, Robert Franklin Stroud (the Birdman of Alcatraz) and George "Machine Gun" Kelly. It's also been the setting for many films such as "The Rock" with Sean Connery and Nicholas Cage, "Escape from Alcatraz" with Clint Eastwood and "The Birdman of Alcatraz" with Burt Lancaster.

On your tour, you'll experience the small cells previously inhabited by these infamous characters, and have an opportunity to snap a few photos and view a documentary on the history of Alcatraz.

Next, you'll drive to Sausalito, a quaint little town known as the "Venice of California." Located north of San Francisco, Sausalito hugs the hills above San Francisco Bay. Named by 18th century Spanish explorers for the "little willow" trees (Saucelito) found in abundance on the banks of its streams, Sausalito covers a mere two and one half miles and boasts spectacular waterfront views. You'll have free time to enjoy the bay views and browse in the boutiques, art galleries, and arts and craft shops along the waterfront, or grab a bite to eat, before boarding your motorcoach for your return drive to the ship.

The tour is non-refundable unless cancelled 10 days prior to the call at San Francisco.

The Island can be congested based on activity in the city en route to Alcatraz. The tour guide may adjust times as need to ensure all content on the tour is covered.

Passengers may have to walk from the pier to the ferry boarding location for Alcatraz.

This tour will operate only on voyages with full-day calls; tour is not available on voyages debarking or disembarking in San Francisco.

Your tour fee include the $31 National Park Service Entry Fee.

The visit of Alcatraz island involves uphill walking and steps.

This tour may operate in the reverse direction.

Tour has a limited availability and passengers are advised to book early to avoid disappointment.

Depart from ship for Fisherman's Wharf and board your ferry

Arrive at Sausalito and enjoy free time for shopping