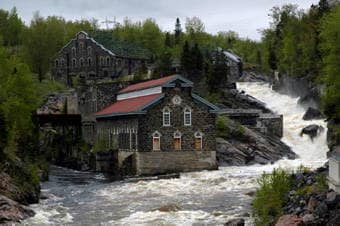 Designed for those who prefer little or no walking but wish to see all the popular sights, this fun and informative 2.25-hour excursion is packed with stirring sites and plenty of photo opportunities.

From the pier you'll travel a scenic route through the verdant countryside to the 338-year-old town of Chicoutimi. Known as the trading route for the First Nations people, it was here that the French established their first fur trading post in the area in the 17th century.

Perched on the Saguenay and the Chicoutimi Rivers, the name Chicoutimi means "the end of the deep water" in the native Innu language. Those prophetic words were realized in 1996 when the Chicoutimi River overflowed its banks and flooded the entire region. 56 buildings were lost but one home, safely perched atop a concrete base, survived the destruction. Immediately stepping off in the heart of the city, you'll see the famous Little White House, renowned as a symbol of the city's resistance, courage and determination. Preserved as a historical park, an adjacent museum commemorates the flood.

Another photo stop awaits you at the Pulp Mill of Chicoutimi. Listed on the Canadian Register as a National Historic Site, the mill is located along the Chicoutimi River. Constructed between 1898 and 1923, and closed over 80 years ago, the spacious stone buildings still stand as a testament to a by-gone era when pulp was king.

Next, sit back and relax as you continue your scenic drive to the tiny hamlet of La Baie. Sitting at the confluence of the Ha! Ha! and Mars Rivers, La Baie was first settled in 1838. Today, its rolling green hillsides are the gateway to the magnificent Saguenay Fjord National Park. Formed during the last Ice Age, the fjord is Quebec's largest and the most southerly fjord in the northern hemisphere. Over 880 feet deep in some places and 65 miles long, the fjord is home to 54 species of fish and marine mammal, including the Greenland shark and the beluga whales. As you wind your way back to the pier you'll pass the Fjord Museum, an interactive museum that details the fjord's history and geology.

Then, be sure to have your cameras ready…because you'll soon pass the Ha! Ha! Pyramid. Despite its unique look and odd name, the 70-foot tall pyramid was erected to commemorate the devastating and deadly 1996 Saguenay flood. Constructed with 3,000 reflecting aluminum "yield" signs, the pyramid is a popular venue for concerts during the summer.

Please note: Transportation for this tour may be by school bus depending on the demand of the day.

Arrive at the Little White House

Depart and drive to the Pulp Mill

Arrive at the Pulp Mill

Drive by the Pyramid