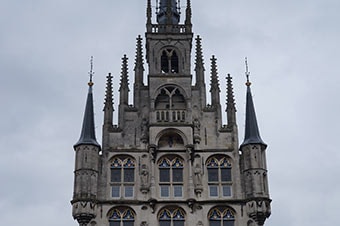 Did you know that Gouda cheese was never actually made in the tiny hamlet of Gouda? It became famous for being bought and sold during the middle ages at the centuries old Markt, the largest in the Netherlands. Learn these facts and more during this fascinating four and a half hour journey that includes a walking tour through the charming 13th century town. To make your half-day excursion even more memorable, don't forget to bring along a camera to capture the sights and wear comfortable walking shoes.

Located just on the outskirts of Rotterdam, Gouda is a picture-postcard version of a little Dutch town. Picturesque canals, medieval buildings, a maze of narrow alleys and beguiling windmills all add to the enchanting ambiance. Named after the Van der Goude family who built a castle on the Gouwe River in the 11th century, Gouda was primarily swampland. But a canal built in 1225 was used to ship goods to France and other European ports. The city quickly flourished and received its city charter in 1272.

Upon arriving, you'll travel down Gouda's narrow cobbled streets and make a photo stop at St. John's Church. Founded in 1280 the church is dedicated to John the Baptist, Gouda's patron saint. Rebuilt in the 16th century after a disastrous fire, the church is famous for its hauntingly beautiful stained glass windows. Of the 72 windows that display biblical and historical scenes, 61 date back to the 16th century. And its 403-foot length makes St. John's the largest cross-shaped church in the Netherlands.

Step off the motorcoach and follow your guide to the 15th century Gothic Town Hall in the spacious Markt town square, a lovely reminder of Gouda's prominence as the center of trade during the Middle Ages. The Hall's external staircase was added in 1603 and on the east wall is a carillon, which rings every half hour, with moving figures representing the granting of the town's charter by Count Floris V in 1272.

Further on, you'll see De Waag, a medieval weighing house for cheese traders. Here, you'll stop for a tasty bite of four different Gouda cheeses, accompanied by a glass of red wine. During the tasting you'll learn that this pale yellow, semi-soft cheese is served in varying stages of maturity: jong cheese has a creamy texture and mild flavor, belegen is much tastier, while oud can be pungent and strong, with a grainy, flaky texture.

Then, you're off for some free time to further explore the square or check out De Waag's Gouda Cheese Museum and discover how Gouda became the center of Dutch dairy production. Interactive audiovisual exhibits explain the story of cheese making process from the cow to the finished product.

Once you've completed your epicurean journey, you'll board the motorcoach and return to your ship.

This tour does not operate from November 1st till March 31st and on April 27th (Kingsday) as the Weigh House is closed.

Depart from ship for a guided tour of Gouda and a photo stop at St. John's Church